Happy 105th birthday to the late, great Vincent Price.  Mr. Price was born on May 27, 1911.  Here is one of the many introductions he performed for the PBS Mystery! series in the 1980's. The clip includes the Edward Gorey titles and Mr. Price seated in "Gorey Manor".


Posted by ampootozote at 9:40 PM No comments: 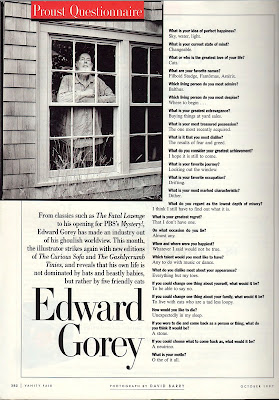 Answering lists of questions to illuminate one's ambitions was a popular pastime in the 19th Century. The Proust Questionnaire is a list of questions that is meant to divulge aspects of the subjects personality.  As a teen, French writer Marcel Proust wrote out answers to an English questionnaire in 1890. His written answers were discovered in the 1920's, and the renamed Proust Questionnaire has continued to amuse and instruct ever since. The list of questions have been whittled down and adjusted for use by several television talk show hosts including James Lipton for Inside the Actors Studio.

Edward Gorey was asked to take the questionnaire for Vanity Fair Magazine, and his answers were printed in the October 1997 issue. Mr. Gorey's answers are typically enigmatic.

What is your current state of mind?  Changeable.
Which living person do you most despise?  Where to begin...
What is your most marked characteristic? Dither.


Posted by ampootozote at 8:42 AM No comments:

The Reviews Are In 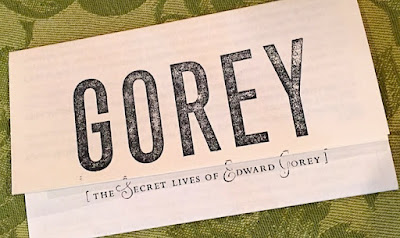 There are several reviews for the Off Off Broadway production of GOREY (The Secret Lives of Edward Gorey). A kind friend from New York sent me a program, which has the feel of a lovely Gorey keepsake.

Posted by ampootozote at 8:01 AM No comments: 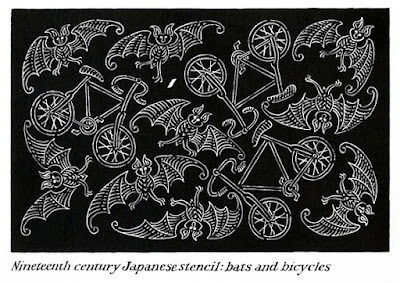 Edward Gorey had a deep affection for Asian culture and references to Japan and the Orient are often found in his books. For the first time, a major exhibition of his work is touring Japan with stops in three cities. Elegant Enigmas, the seminal traveling exhibition of Mr. Gorey's original art from the archives is being exhibited this year in three cities - Itami City Museum of Art (April 2 - May 15), Fukushima Prefectoral Museum of Art (July 16 - Aug 28, and finally Shimonoseki City Art Museum (Sept 8 - Oct 23). The traveling exhibition is being supplemented by first edition books from the collection of Toshinobu Hamanaka.