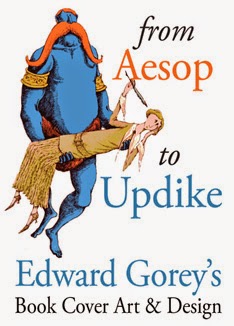 Get your travel plans set to visit The Edward Gorey House this year because the new exhibition will open on April 16th. Now in its 13th, the EGH celebrates the life and work of Edward Gorey with annual themed exhibitions or original artwork, printed materials, unusual memorabilia, and eclectic ephemera from his life. Making the experience unique, the museum is housed in the home Mr.
Gorey lived in. 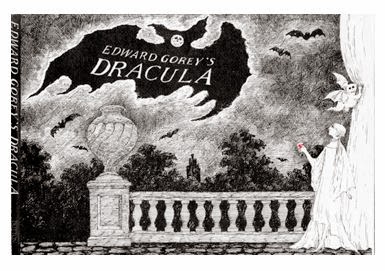 A prolific illustrator and author, Edward Gorey published his own works while also illustrating hundreds of books by other authors. The 2015 exhibition is titled, From Aesop To Updike Edward Gorey's Book Cover Art & Design, and features books and original artwork from Mr. Gorey's earliest days working at Anchor Publishing to the posthumously printed Cautionary Tales by Hilaire Belloc. 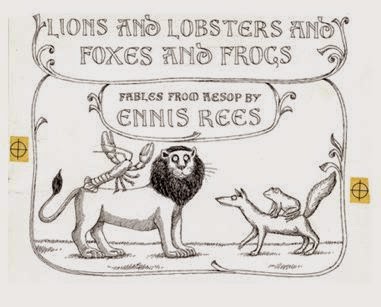 For more information on The Edward Gorey House and the 2015 exhibition, go HERE.

Posted by ampootozote at 8:03 PM No comments: 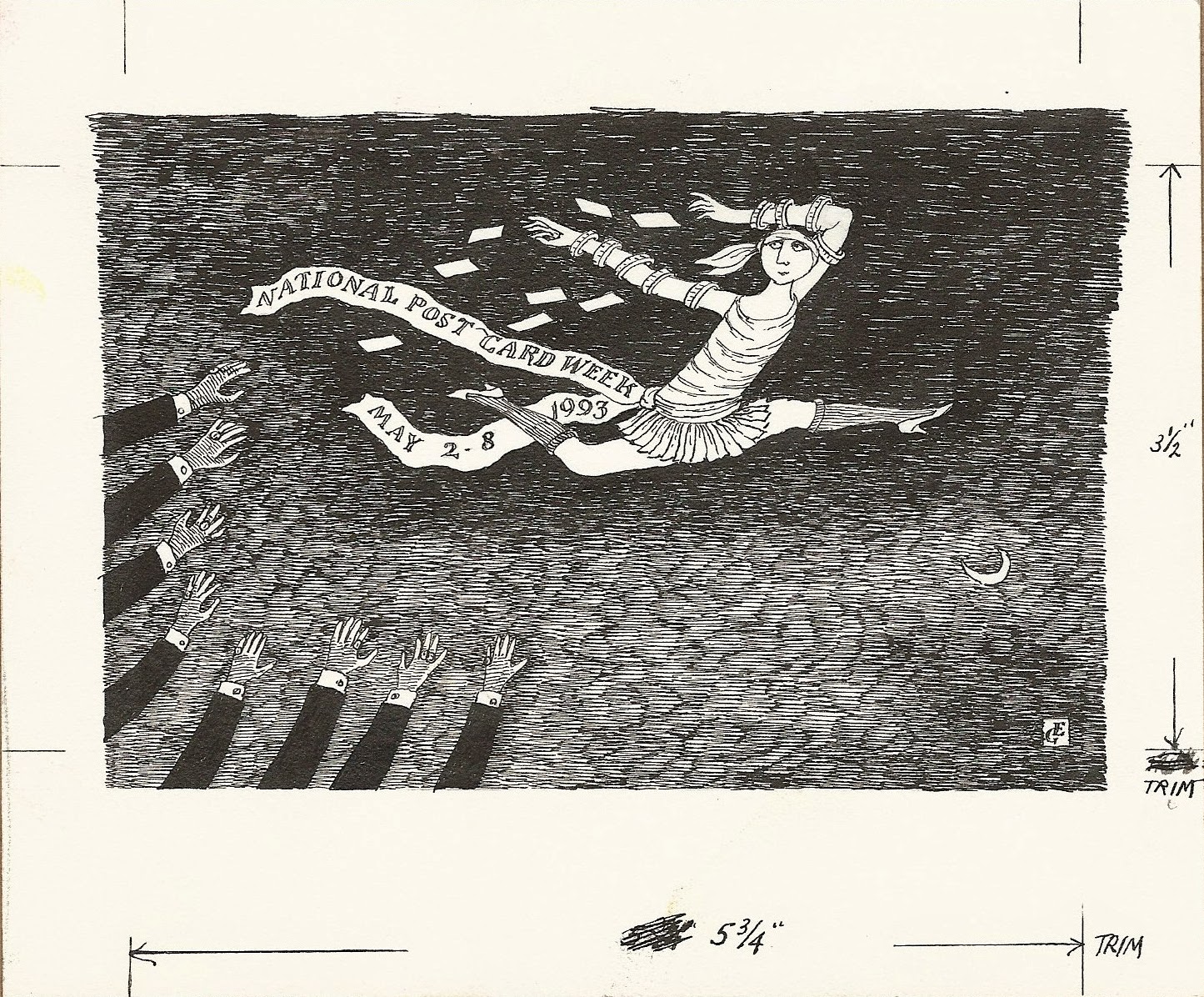 From 1984 to 1996, Edward Gorey created a series of postcards celebrating National Postcard Week for Gotham Book Mart (See my post from May 4, 2012). The cards announce an annual exhibition of postcards at the gallery.

The original artwork from the 1993 card shows a young woman leaping over the outstretched arms of an adoring male audience in the moonlight. As she soars above them, she is scattering a postcard for each to catch. All of the open hands wear a matching ring, and presumably matching tuxedos. The crosshatched background deepens behind the woman, giving the image the appearance of a stage set. This artwork has been reproduced many times with the lettering removed from the sash. It is always interesting to compare Mr. Gorey's original uncropped artwork to the final cropped image. For this image, the cropping shortens the arms on the left and cleans up the edges, tightening the image and focusing our attention on the woman. The uneven edge on the original art reveals the hand work involved in producing the crosshatched background, bringing Mr. Gorey's involvement with the piece alive. 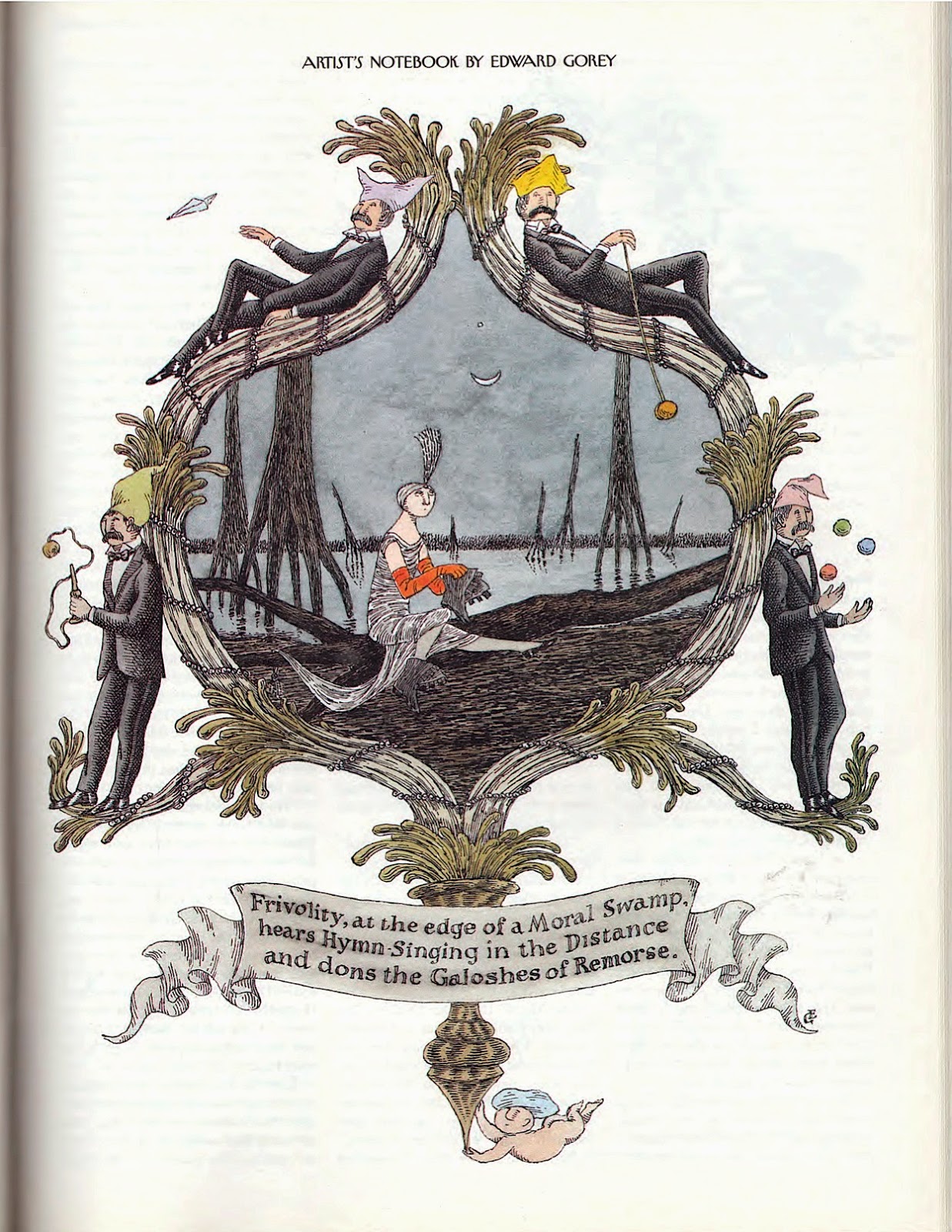 Over the span of more than 25 years, the work of Edward Gorey appeared in The New Yorkermagazine. Advertisements, spot illustrations, a cover design, and independent works appeared alongside the magazine's oblique cartoons, articles, and reviews. Edmund Wilson also famously reviewed Edward Gorey's early books in the magazine in December 1959.

Two wonderful pieces by Mr. Gorey appeared in 1993 as full page illustrations (magazine scans shown). The first appeared with the title, Artist's Notebook by Edward Gorey in the March 22, 1993 issue. The image shows Frivolity donning the Galoshes of Remorse. This fantastic image appears at the beginning of Amphigorey Again and can be purchased as a print from The Edward Gorey House HERE. 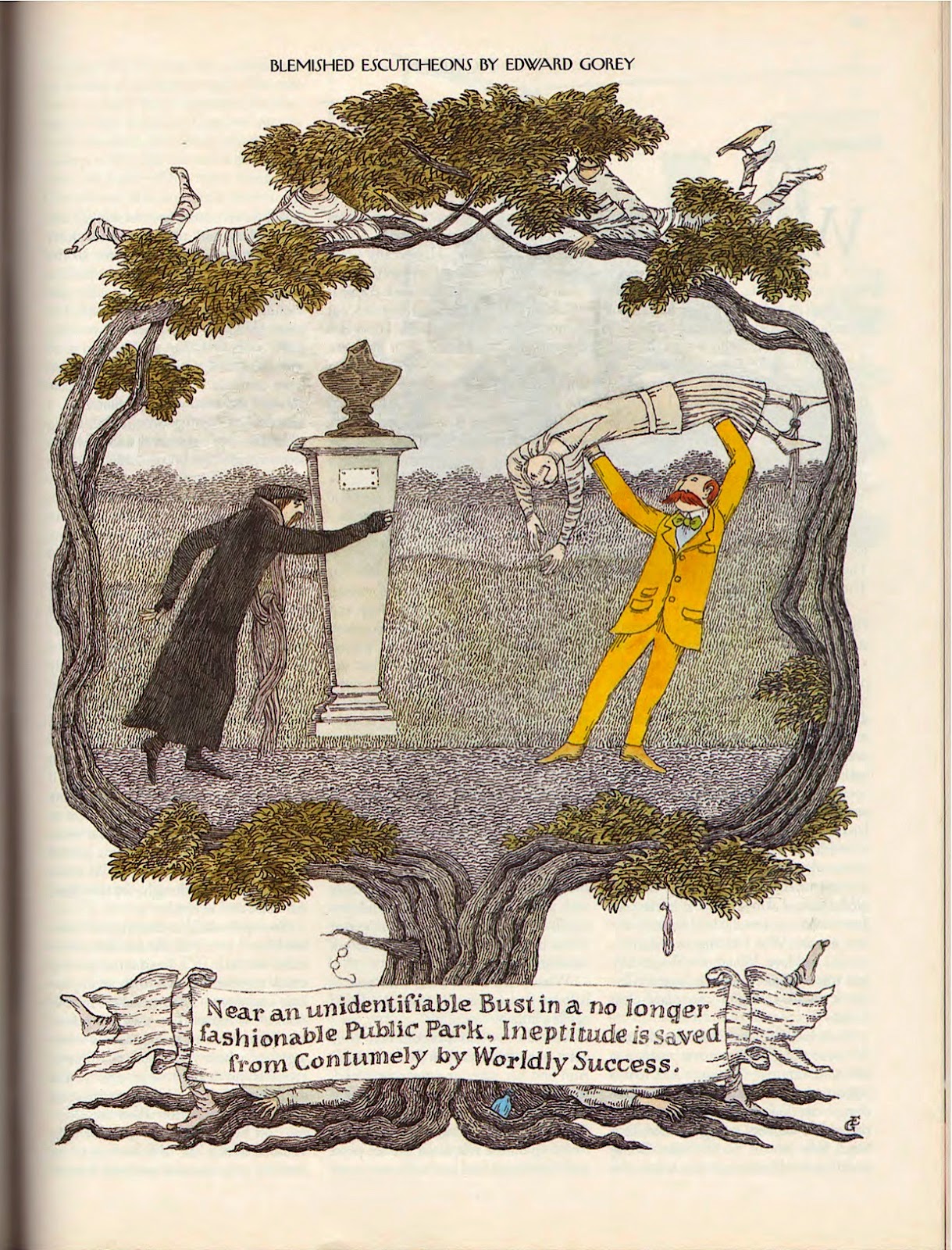 A seldom seen companion piece appeared in the May 10, 1993 issue entitled Blemished Escutcheons by Edward Gorey. This equally wonderful piece features Ineptitude being saved by World Success. Visually, the vignette for this piece is highly reminiscent of the images Mr. Gorey created for Mystery!.


Posted by ampootozote at 8:49 AM No comments: