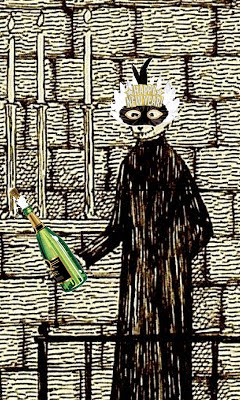 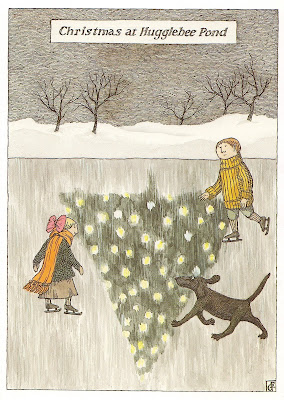 Posted by ampootozote at 6:39 AM No comments:

Deck Those Halls! Trim Those Trees! 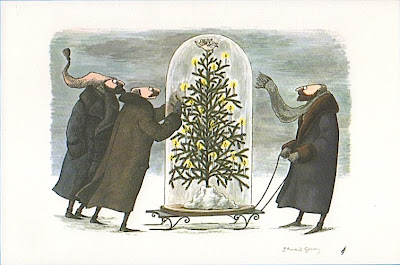 Posted by ampootozote at 8:12 AM No comments: 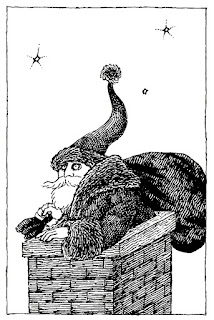 It's almost that time again!

Posted by ampootozote at 9:09 AM No comments: 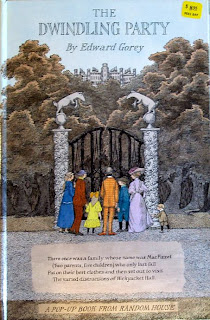 If you are near Chadds Ford, Pennsylvania this Holiday Season and need to get out of the house, be sure to check out the Brandywine River Museum's show entitled Pop-Up! Illustration in 3D. The exhibition showcases pop-up books from the 19th Century though today's book artists. The show features completed books as well as showing the planning and work that goes into making a pop-up book. Of particular interest to the Edward Gorey enthusiast are the working mock-ups and designs for The Dwindling Party. Pop Up! Illustration in 3D runs through January 6th,.
Posted by ampootozote at 7:02 AM No comments:


Leaves From A Mislaid Album (see my posting from April 24, 2009) first appeared in First Person, A Journal of Travel Memoirs and Humor, Volume 1 Issue #1, edited by Morton Elevitch and published by Bradford & Bigelow, Salem, MA, Fall 1960. 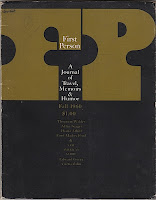 This publication marks the first appearance of a "story" by Edward Gorey in a periodical publication. Previous to this, he created a cover design for The Harvard Advocate in 1950 and for Harper's in 1952, but it was not until after this publication that Mr. Gorey's work began to appear regularly in periodicals. The cover illustration and seven of the seventeen images created for this title are featured in the publication.

It was long speculated that the only "A" Collection book that Edward Gorey released original artwork from was The Broken Spoke, when in fact he also sold pieces from Leaves From A Mislaid Album. I know of at least three pieces of original artwork from LFAMA which are in private collections, including one piece in my collection. 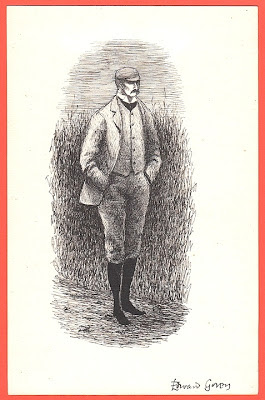 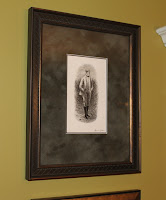 The artwork I have shows a typically English gentleman, dressed in "tweeds" and a cap standing in long grass. The fineness of the line work in this piece is truly remarkable. The leaves of long grass are mere whispers of line on the surface of the paper, yet they combine to create a deep backdrop for the man standing in contemplation. The rendering of the man's black boots and tie are so densely cross hatched that the surface of the paper has been torn by the pen point and ink has soaked into the paper.  The piece is hand signed by Edward Gorey.

I have framed this piece in a moss green velvet matte and it looks like it came from an antique picture album. As so often happens with Gorey artwork, my framer tried to convince me that I had a Victorian etching and not a piece of original artwork from 1960!
Posted by ampootozote at 7:16 AM 2 comments:

Vincent Price was an actor, connoisseur, raconteur, and art collector. He also introduced Mystery! on PBS from 1981 to 1985, earning him a beloved place in the the world of Edward Gorey.  Here is an interesting half hour interview that was taped on April 24, 1974 in which he expounds on art collecting at length.