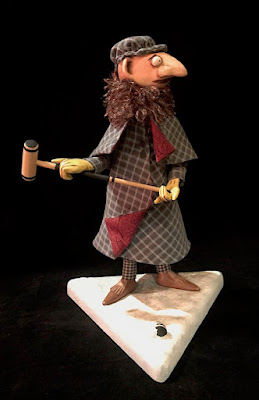 I have the good fortune to be married to a man who loves to make special gifts for special occasions. For our 41st anniversary this past November, I received a hand made Mr. Earbrass figure. Recreating a scene from The Unstrung Harp, Edward Gorey's first published work, the intrepid Mr. Earbrass is braving the elements to complete a forgotten game of croquet. The collaged figure is amazingly detailed and everything from his head, hands and feet to his croquet mallet are hand made to scale. In the book, Mr. Earbrass is wearing a fur coat during his attempt to finish his game, but Bill decided to swap out his clothing for his traveling costume shown later in the book. Using bits of fabric with appropriately sized patterns, Mr. Earbrass is stylishly attired to brave the elements.

Bill has always enjoyed creating vintage style toys, and Mr. Earbrass is not just a figurine, he is also a Räuchermännchen, or incense smoker toy. Räuchermännchen were first made around 1850 in the Ore Mountains, a region that forms the border between Germany and the Czech Republic. They usually feature pipe smoking figures in traditional costume and remain popular holiday decorations. 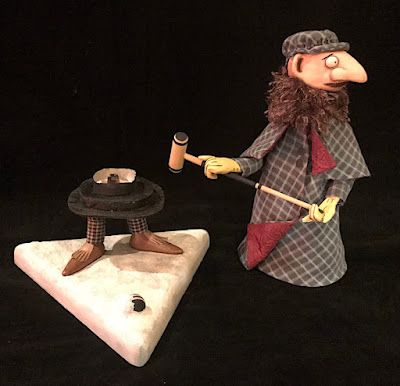 Posted by ampootozote at 6:53 AM 2 comments: