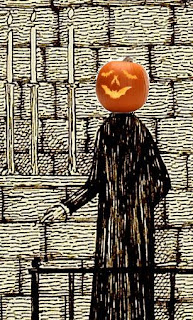 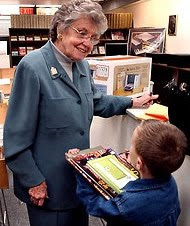 Florence Parry Heide, author of the Treehorn Trilogy, passed away on October 23, 2011, at age 92. Edward Gorey illustrated the Treehorn books. She died in her sleep at her Kenosha, Wisconsin home. Here is her obituary in the New York Times.
Posted by ampootozote at 6:42 AM No comments: 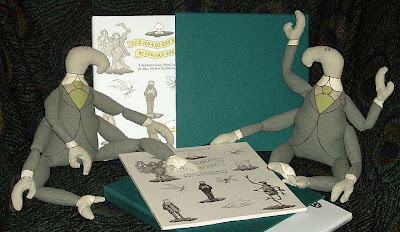 The Headless Bust, a Melancholy Meditation on the False Millennium by Edward Gorey was published in 1999 by Hardcourt Brace, New York. This title was published as a hardcover with illustrated boards and a matching dust wrapper. The Headless Bust was Mr. Gorey's final "A" collection book published during his lifetime.

The Headless Bust is a sequel to Mr. Gorey's 1997 publication, The Haunted Tea Cozy. The main characters once again are the Bahhumbug and Edmund Gravel. 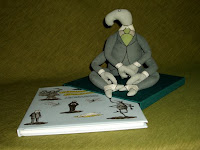 In this outing, the Whatsit - a flying bug-like creature - takes them on journeys near and far to witness "shame and disgrace".

In addition to the standard printing, The Headless Bust was published as a slipcased, limited edition volume with 750 numbered and 26 lettered (A to Z) copies. Each of the limited edition books is hand signed by Edward Gorey. I am showing copies #95/750 and #M/26. I also have an Uncorrected Proof of this title, which was issued by Hardcourt in grey wrappers (see photo at the top of the post). The printing quality on the proof is significantly less well executed than in the final books. 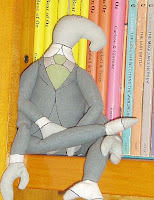 Each limited edition copy of The Headless Bust was issued with a custom made beanbag Bahhumbug doll. These delightful dolls are stuffed with poly beads (no worries about bugs or critters eating a rice filling), have six arms/legs, are printed front and back, and can be posed in many positions. The photo to the left shows one of my dolls sitting on a high book shelf.

While each of the 776 limited edition books was issued with a doll, there was a small number of extras created - I believe there were about 25 or so single dolls produced, which would make sense if the total order for dolls was 800. The extra dolls were sold individually by Gotham Book Mart. It is also interesting to note that some Bahhumbug dolls were printed looking right, while others were reversed and look to the left. Whether this was intentional, or a mistake on the part of the manufacturer, I do not know.
Posted by ampootozote at 7:08 AM 5 comments:

With this posting, we complete the 2002 Gotham Book Mart list of prints created by Edward Gorey. The list ended at #117, plus one extra unnumbered print listed. We still have a number of etchings to cover in a future post, but they were printed after Mr. Gorey's death and are not on this list. Many of the prints shown on this post are available for purchase from The Edward Gorey House - edwardgoreyhouse.org - although some editions may be sold out. As with Edward Gorey's other prints, the editions completed after his death are available hand numbered with a facsimile signatures. #106 Figbash Takes A Bow - 40/50 prints were hand signed. 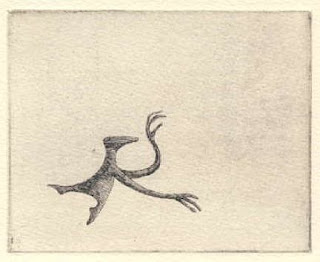 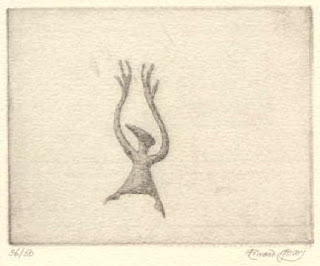 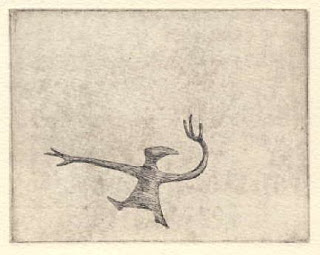 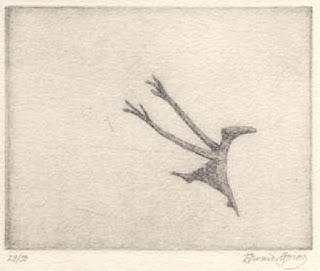 #115 Night Creature Carrying Baby Aloft - 50/50 prints were hand signed. I am showing print #40/50. Along with print #41 Au Secours, this is one of Edward Gorey's most successful prints. In both prints, Mr. Gorey embraced the medium of printmaking and created striking images which could only be created through the printmaking process. With his use of shadow and light, Mr. Gorey conveys darkness and despair in Night Creature more convincingly than he could have in his standard cross hatched drawing style. In person, this print has a beautiful, almost three dimensional inky black surface. This image has been used as the cover for a vampire story compilation book. 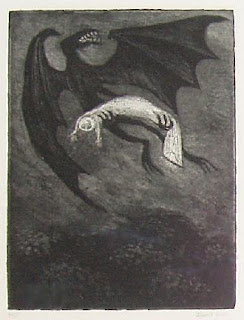 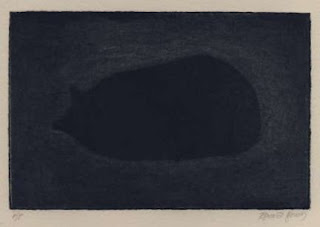 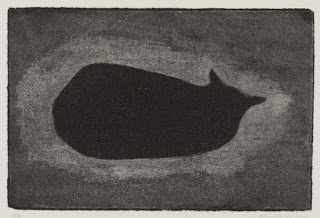 Figbash English Soup - 300/300 prints were hand signed. This print was primarily available through Storyopolis in California, although Gotham had a few available. The Gotham list also said there were 23 Artist's Proof prints available. 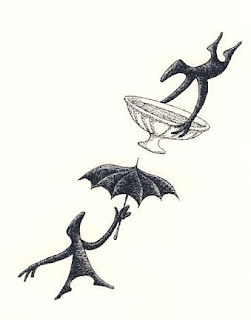