Edward Gorey was an enthusiast and supporter of the New York City Ballet. One way he showed his support was to create images which the Ballet could have printed on merchandise which they sold in their gift store. Posters, cards, clothing, beach towels, and pinback buttons all were adorned with Gorey images.

I am showing three pieces of original artwork that Edward Gorey created in October 1975 to be used as pinback buttons for the ballet. This artwork was offered to me many years ago by Gotham Book Mart, but unfortunately I was unable to acquire them at the time. I am especially fond of the image at the bottom with the dancer being held aloft. The composition of this design is both gravity defying and amusing. I do not know how dancers are trained to hold their hands when striking a pose, but this ballerina's hands have a manic look about them even though her expression is confident.

Posted by ampootozote at 6:45 AM No comments:


Since originally publishing this post, a friend generously gifted me with the two buttons I was missing from Edward Gorey's Cape Cod theatrical productions. The revised post follows:

Edward Gorey created pinback buttons for most of the theatrical entertainments he was involved with. He also created a number of pinback buttons for the New York City Ballet. These buttons were usually made in very limited quantities and were sold in lobbies and gift stores at the events. Extra buttons were usually sold by Gotham Book Mart. Even though they were inexpensive souvenirs, they can be quite difficult to find today, making them a challenging collectible to acquire.

Mr. Gorey usually drew a unique image for the pinback buttons, making each button the only place you will find the image. If the image also appeared on a program or poster, he would redraw it to size for the button rather than reducing it down. Each design is a vignette that often includes the title of the production it was created for. Below I am showing a complete collection of the buttons from his productions on the Cape.

From 1994 onward, Figbash makes frequent appearances on the buttons, as well as on posters, programs, announcement cards, and even on stage. I own one of the earliest white hand sewn Figbash dolls that was included as part of the set decoration on Chinese Gossip.

Tinned Lettuce & Amphigorey - These two productions were performed in New York City and not on the Cape. Tinned Lettuce is from 1985 and Amphigorey from 1994. I attended performances of both of these productions. The Tinned Lettuce button is the only one to have a maker's mark along the edge: N C SLATER CORP NYC 10011 (followed by a minute logo). All other buttons are unmarked. 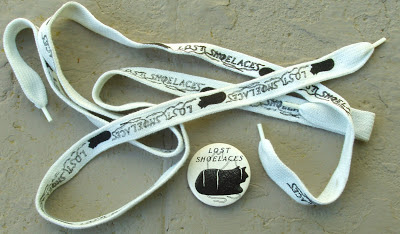 Lost Shoelaces 1987 - Another souvenir from this production are the printed shoelaces which were sold in pairs.

Useful Urns 1990 - The small boy appears on many theatrical posters and buttons.

Crazed Teacups 1992 - The boy is adrift atop teacups which are floating in Chinese-style clouds or waves.

Salome 1995 - Figbash in a supplicating gesture. This button does not have the name of the play on it, but rather a command for the viewer.

Epistolary Play 1997 - Figbash dances with a replaceable pen point of the sort that Gorey used in his drawing pens.

English Soup 1998 - Figbash with an urn, there was also a limited edition print created for this production.

Tragic Secrets - This is a pose I have yet to see any of my dogs achieve...but they try... According to Rick Jones, director of The Edward Gorey House, Tragic Secrets was scheduled to be performed but had to be cancelled due to the illness of "the most important actor". Another production was mounted and the button is all that remains of what might have been.
Posted by ampootozote at 7:19 AM 4 comments: 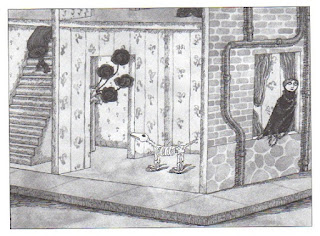 On my post from December 28, 2011, I featured an image by Edward Gorey entitled: Les Roses bleuatres l'oubliette dans la cuisine which was included in the 1975 Graham Gallery Problem Pictures show. I have recently run across two black and white reprints of artwork that must have been created as companion pieces for the show. If Edward Gorey used the same size and format for each of the three paintings, the images are heavily cropped in the black and white photos, but perhaps he created the images in different shapes and sizes. 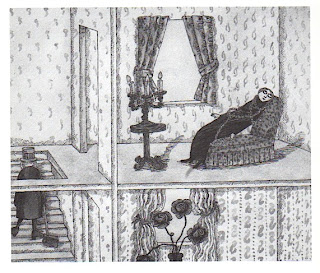 Finding two more images makes me wonder if there might be more to this series. Some enigmatic story line is indicated - in the first piece (or possibly the final piece) we have an exterior view of the cutaway building, while the other two images indicate strange domestic events.