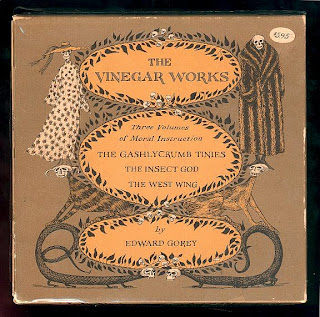 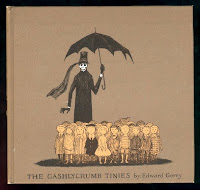 Published in 1963 as a slipcased collection of three books intended to instruct, appall and amuse, The Vinegar Works, Three Volumes of Moral Instruction by Edward Gorey celebrates its golden anniversary this year. A special exhibition of artwork from the three volumes, The Gashlycrumb Tinies, The Insect God, and The West Wing, will be on display at The Edward Gorey House beginning April 18, 2013 and continuing to the end the year.

Nearly all of the drawings from The Vinegar Works will be on exhibit at The Edward Gorey House (sadly, the letters K, L and M from The Gashlycrumb Tinies have vanished  over the years). The House will be displaying the original art from the three books together for the first time since Edward Gorey created these iconic images. Individual pieces of art from each of the three books have been included in exhibitions in the past, but the artwork from all three books has never been displayed together in their entirety. 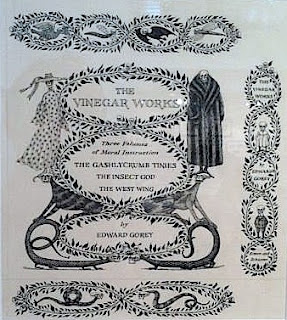 Even though images from these books have been printed in books and reproduced on everything from lunch boxes to coffee mugs, no printed or computer generated reproduction can compare to the visceral experience of viewing the original artwork in person. When viewed face to face, the artist’s touch in bringing pen to paper can actually be seen and felt in the finished drawings.

In the printing process, every line within a drawing is given equal emphasis and is printed in the same tone of black ink, which flattens the images. Each part of the image is either black or white with no tonal modulation. 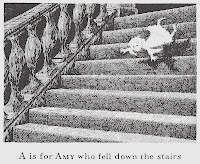 When viewing the original artwork, the India ink comes alive revealing a depth and richness - heavy pen strokes are actually darker than light feathery lines. In all three suites of drawings being displayed, Mr. Gorey created darkness and shadow by crosshatching and varying the thickness of the line, not by in-painting ink with a brush. This technique of adding multiple layers of lines, one atop the other, creates added depth in the black areas as the paper transforms into a three dimensional pool of ink due to its saturation on the surface. The inky blackness of the color tricks the eye, and in person the original drawings appear smaller and more concentrated than their printed versions. 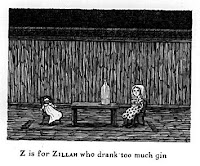 Edward Gorey was a month shy of his 35th birthday when he began the artwork for The Gashlycrumb Tinies on Jan 11, 1960. At that time, Mr. Gorey was employed as the art director at Looking Glass Library. Because his day job kept him busy during normal working hours, he created drawings on weekends, in the evenings, and on his days off. A typical drawing for the book would take about day to ink. Every drawing is dated on the reverse with a start and finish date. These dates indicate that, while some drawings were completed in one day, most were started one day and completed on a second day.

Edward Gorey worked on the drawings for Tinies in alphabetical order starting with A and continuing to Z. As he closed in on completing the art, he sped up, finishing both letters Y and Z on Friday April 15, 1960 - Good Friday of Easter weekend! 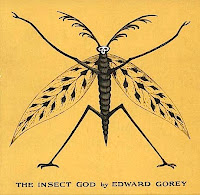 The drawings for The Insect God were also completed in sequence beginning on Wednesday April 19, 1961. The final push for The Insect God was a weekend where Mr. Gorey rarely left his drawing station. On Saturday May 20th he completed drawing #8 (started on Monday May 15) and #9. Sunday May 21 was a test of his concentration and abilities as he inked three drawings (#10, 11 & 12). He finished the art for the book on Monday May 22, 1961 with the final two drawings (#13 & 14). 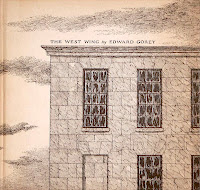 The West Wing proved to be the most problematic of the three books, probably due to the fact that Mr. Gorey was not working with a plotted text. Being a collection of individual images which relate to one another primarily because they are all interior vignettes, the story that holds them together is created by the viewer. The dates on the back of the drawings show that the art was created in no particular order over a two year period and was set aside several times for other projects. 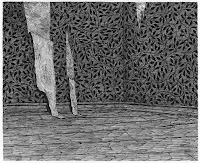 The artwork in The Vinegar Works represents some of Edward Gorey’s most intricate and beautiful drawings. Each individual drawing is a tour de force of inspiration and craftsmanship elevated to the level of perfection. The ability to visit The Edward Gorey House and view all the artwork from the three books is an experience that may not come again...and one that should not be missed!
Posted by ampootozote at 8:19 PM 1 comment:

At the beginning of the month I posted some newly recognized images from Edward Gorey's 1974 Graham Gallery Exhibition entitled Plain & Coloured Drawings. Recognizing these images had inspired me to hunt through day planners and calendars that I have not looked through in some time.

Looking at Gorey Rare, an engagement calendar published by Pomegranate in 2007, I have located what I hope to be two more images from this show. The number refers to the original list from the exhibition. These are both wonderful drawings full of humor in one and foreboding in the other. The origin of the images is not indicated in the publication, so if anyone has more information about these images, I would love to hear from you. 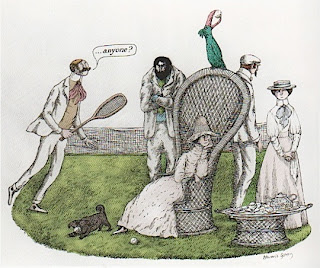 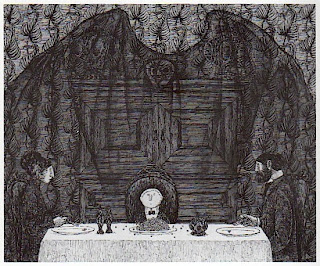 Posted by ampootozote at 9:13 PM 4 comments: 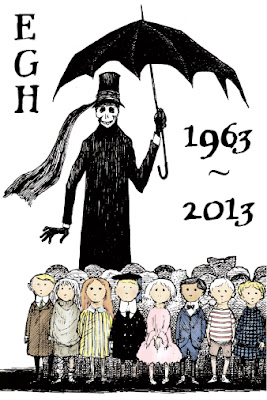 Only one month to the opening of the Vinegar Works Exhibition at The Edward Gorey House! The exhibition celebrates the 50th Anniversary of the publication of this remarkable and disturbing work in three volumes. The exhibition opens on April 18th and runs to the end of the year.
Posted by ampootozote at 7:28 AM No comments:


A little over a week ago, I posted some newly recognized images from Edward Gorey's 1974 Graham Gallery Exhibition entitled Plain & Coloured Drawings. I ran across two more cats from the exhibition - in postcard form this time.

I do not know if the colors were adjusted for this printing or if the colors shown represent Mr. Gorey's original watercolor choices. 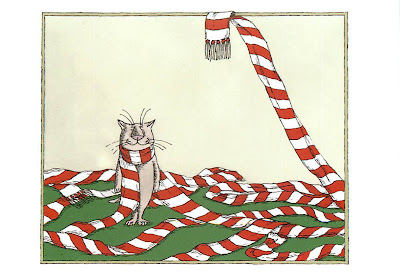 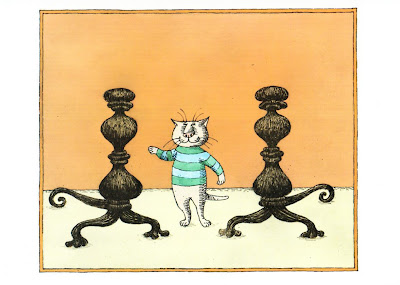 Posted by ampootozote at 6:47 AM No comments: