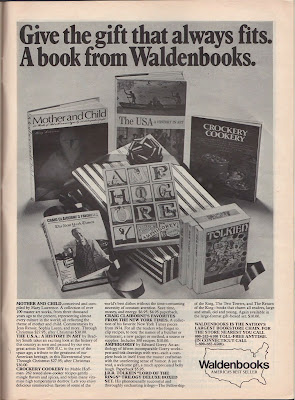 This is a vintage ad from Time Magazine, December 1975. In this ad for Waldenbooks, the paperback edition of Amphigorey by Edward Gorey is featured front and center. The description below states that Amphigorey is, "A joy to read, a welcome gift, a much appreciated belly laugh." 42 years later, this still holds true. Find a copy and give it to a deserving friend this holiday season!


Posted by ampootozote at 7:20 AM No comments: 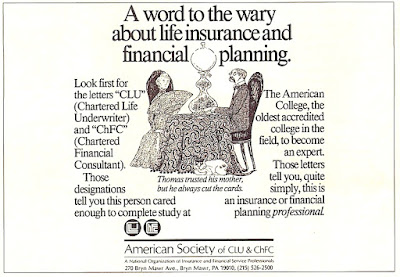 Edward Gorey was an illustrator for hire whose work often turns up in unusual places. This is an ad promoting the use of insurance professionals from The American College of CLU & ChFC. The add appeared in Time Magazine in August 1987.

Often, Edward Gorey's illustrations for advertisements have little or no direct relationship to the product they promote, and require a leap of the imagination to make the connection. This disjointed ad has a layout that is visually confusing and leads one to surmise that the art director was simply a fan of Mr. Gorey's work and wanted to get him to do an illustration. The drawing itself, when freed from the constraints of encroaching type, appears to be a typical evening of two people playing cards with a cat resting at their feet. The enormous fan, along with the tag line, "Thomas trusted his mother ,but he always cut the cards" provides the humor to the scene.


Posted by ampootozote at 6:23 AM No comments: 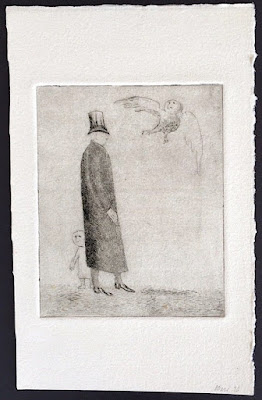 On February 5, 2011 we began a discussion on this blog of the various Fine Art Prints created by Edward Gorey. To view the other blog posts regarding these unique pieces of collectible Gorey artwork, search for Fine Art Prints in the blog's search engine.

Recently, two previously unseen etchings by Edward Gorey appeared at an on line auction (neither are in my collection). Both of these prints appear to be working proofs made by Mr. Gorey at the Cape Cod Conservatory., and neither print appears to have been put into production. Both of these prints have been dated, which was not done on any print editions.

The first etching shows a typical Edward Gorey man in a frock coat and top hat with a child in shapeless garb being confronted by what appears to be a bird. The bird's beak resembles a hooked nose and gives the foul a human expression. This print is dated 1976 in the lower left corner in pencil in Mr. Gorey's hand. 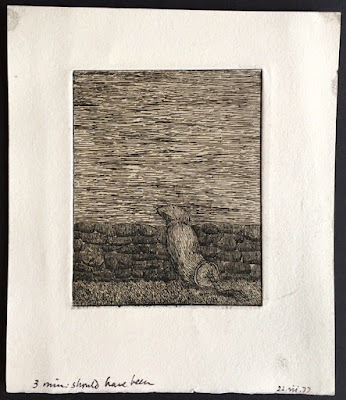 The second etching shows a Bolster leaning against a wall. This print is dated 1977 and has a note about timing written in Mr. Gorey's hand in the lower margin. The note reads, "3 min should have been", indicating that the plate was overexposed to the acid when etched, which would have resulted in the over all darkness of the image. Mr. Gorey made several more Bolster etching plates which were printed after his death. The other Bolster prints have more delicate appearance than this example, which also indicates that this plate was over etched.

Many of Edward Gorey's Fine Art Etchings are available from The Edward Gorey House HERE. Prints can also be found on the secondary market through auctions.


Posted by ampootozote at 7:31 AM No comments: