Returning to the wonderful world of nonsense that, for me, best exemplifies the work of Edward Gorey, L'Huere Bleue is a real treat. In this title, two dogs dressed in letter sweaters banter back and forth, the exchanges soaring as lightly as a badminton birdie on each page. Some of the art in this book approaches "other worldly" in its design and execution. In one panel, the dogs float in front of a giant Japanese fan. In another, they are disporting themselves on what appears to be a sculpture by Joan Miro. 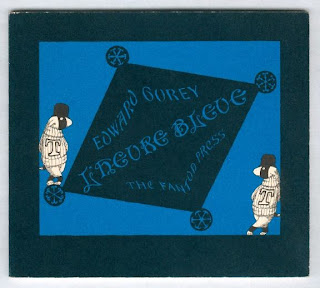 Published in 1975 by Mr. Gorey's own Fantod Press, this title is printed though out in blue and black and is limited to 500 numbered, signed copies in wrappers. This title appears in Amphigorey Also. I am showing copy #19/500.

There were 26 A-Z copies which had a special slipcase/blue cloth binding, no DJ. The colophon lists an addition two copies, lettered T:I & T:II which are slipcased and each includes an original drawing with additional remarks in Japanese. Edward Bradford's F is for Fantods bibliography of EG's Fantod Press books states that these two copies were never completed. 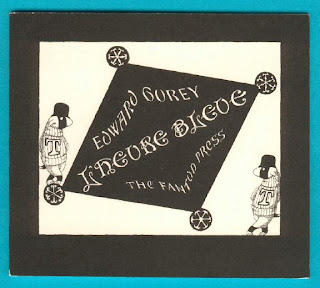 In addition to the standard limited edition, L' Heure Bleue was published in a separate limited edition of 38 numbered/signed copies in wrappers without the distinctive blue printing. I am showing copy #20/38. Mr. Gorey is said to have wanted to see the book without the addition of blue to the artwork.
Posted by ampootozote at 6:00 AM 2 comments: 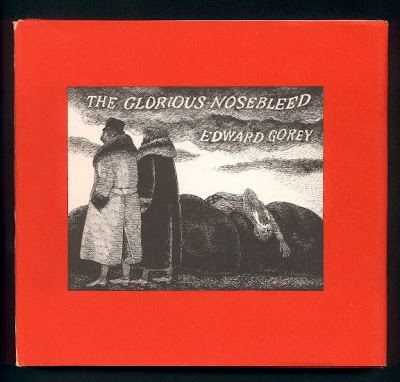 Edward Gorey's fifth alphabet book, The Glorious Nosebleed was published by Dodd, Mead & Co. in 1975 as a limited edition and as a regular edition in illustrated boards with a matching dust jacket. This title is reprinted in Amphigorey Also. The Glorious Nosebleed will be available once again as an individual hardcover in November 2009. 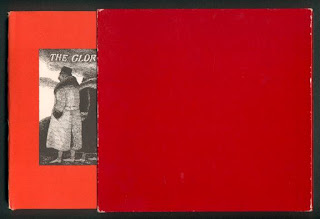 The limited edition has 250 signed/numbered copies, and 26 signed/A -Z copies (limitation on a tipped-in colophon page at the front of the book). All of the limited edition copies were issued in a red slipcase. I am showing copy #55/250.

This is one of the easiest Gorey books to spot in first printing because the binding color of the first edition (including the limited edition copies) is tomato red. When this book went into a second printing, the color of the binding changed to cherry red. I have put the two books side by side in the photo below so you can see the color difference (the first edition is on the right). 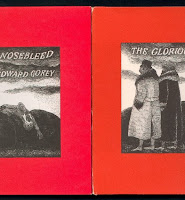 The Glorious Nosebleed is one of Mr. Gorey's more amusing and popular alphabet books. The individual images have been reprinted as postcards and calendars over the years. The book ends with one of EG's nicest self portraits which accompanies, "He wrote it all down Zealously".
Posted by ampootozote at 6:00 AM No comments: 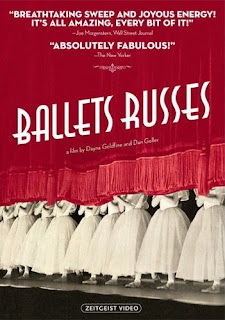 Today, I am offering a video recommendation. As every Goreyphile knows, Edward Gorey was obsessed with George Balanchine and the New York City Ballet. Before the NYCB, there was the Ballets Russe. There is an excellent ballet documentary titled Ballets Russes that came out in 2006.

In this documentary, members of the Ballets Russe and the rival company the Ballets Russe of Monte Carlo, tell stories about their lives as professional dancers. Mr. Balanchine plays into the history of the Ballet Russe and there is a section in the extras where the dancers reminisce about working with the famed choreographer. The people interviewed are in their 70's and 80's and many are still teaching and dancing daily.

This is the world of The Gilded Bat, where the ballerinas glide onstage on their toes and everyone (including Americans who join the company) has a long Russian name. For someone like myself with only a passing knowledge of classical ballet, this video was amusing and illuminating. Add this one to your Netflix queue.
Posted by ampootozote at 6:00 AM No comments: 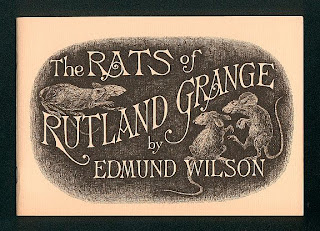 Published as an individual book in 1974 by The Gotham Book Mart, The Rats of Rutland Grange originally appeared in Esquire Magazine in 1961. Written by Edmund Wilson in verse, this Christmas story is illustrated by Edward Gorey. This book was published in an edition of 1000 unsigned/unnumbered copies in illustrated wrappers and 100 signed/numbered hardcover copies, each of which are housed in a slipcase. The copy I am showing is from the edition in wrappers, and it has been signed and inscribed to me by Mr. Gorey.

Published as a holiday story, The Rats of Rutland Grange is one of my least favorite Gorey-illustrated titles. Perhaps it is the rats, but as a holiday book I do not find the premise at all appealing. The less said the better. 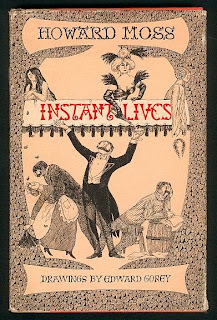 Also published in 1974, this time by the Saturday Review Press/Dutton, Instant Lives by Howard Moss is an enjoyable Gorey-illustrated book. The book was published in a limited edition of 350 copies and as a trade edition (shown). Drawing inspiration from the lives of composers, artists and literary icons, Mr. Moss has written short, often amusing stories of the creators and their creations. Mr. Gorey made illustrations for many of the stories which capture the humor and mood of the subjects. Particular favorites amongst the drawings are Gertrude Stein (with a heavily mustached Alice B. Toklas hovering) wrestling a painting from Pablo Picasso, and Mary Shelly being confronted by her Creature. This is the only drawing of Frankenstein's creature by Edward Gorey that I am aware of.
Posted by ampootozote at 6:00 PM No comments: 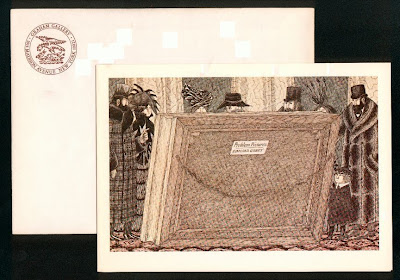 The 1974 exhibition was successful enough for Mr. Gorey to be included in two more shows at The Graham Gallery.

In 1975, EG created pieces for an exhibition entitled Problem Pictures. There is a folded announcement card for this exhibition, but it has virtually no information about this show apart from the dates - December 2 - 31, 1975. I have not seen any listing for what was included in this exhibition, so the three examples printed on the folded card are the only works we know were in the exhibit. The copy I am showing has been signed by Mr. Gorey.

I know that there was work by at least one other artist shown in the gallery at the same time. Artist Alexa Grace appears to have had some pottery shown in this same exhibition. Enquiries for information to Graham Gallery and Ms. Grace have, as yet, remained unanswered. 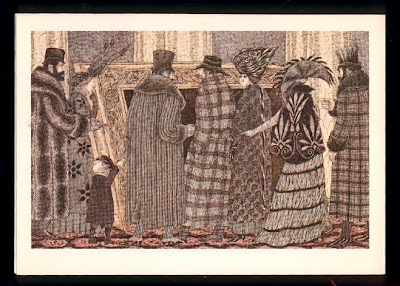 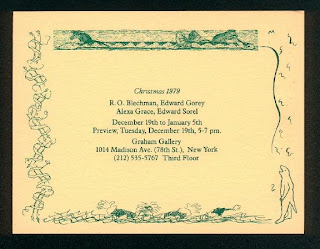 In 1979, a holiday group show at Graham had works by four artists including art by Edward Gorey. I have the announcement card for this exhibition which shows one piece of art from each of the four artists who participated.

The image at the top of the border was drawn by Mr. Gorey. It shows a snake being straddled by two mice and which is adorned by a holiday bow around its middle. I know the person who owns this piece of original artwork, but once again, have no idea what else might have been exhibited.
Posted by ampootozote at 6:00 AM No comments:

The second piece of original Edward Gorey artwork in my collection which was included in the 1974 Graham Gallery Exhibition is titled Blue Urns. As with Two children on a rock (see my posting from July 3, 2009), I believe this piece has not been seen publicly in 35 years. 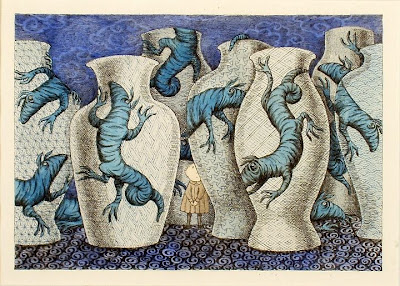 This incredible piece of art is a masterpiece of Mr. Gorey's imagination and skill. The dragons are particularly wonderful, especially the ones who have slipped off the urns and are slinking around the room. In addition to the pitch-perfect watercolor tones, layers of complex pattern fill the entire piece. The line work is executed in two colors of ink. The detailing on the urns is rendered in blue ink, which provides a subtle contrast to the blacks used elsewhere in the piece.

In one of my classes in college, the professor asked the students to name the one object (not a person or pet) they would save if their home was on fire. I have to admit that this just might be the one thing I would be clutching if this ever happened.
Posted by ampootozote at 6:00 AM 8 comments: 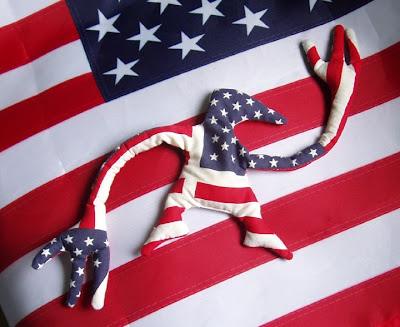 Two Children on a Rock

The first piece of art in my collection from the 1974 Graham Gallery Exhibition (see previous post) is titled Two children on a rock. To my knowledge, this piece has not been seen publicly since the exhibition. 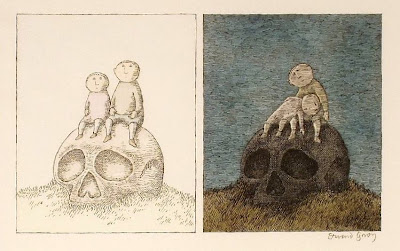 This image is classic Edward Gorey. The image shows two windows drawn on the same piece of paper with the scene repeated in each panel. The "rock" is obviously a giant skull. In the daylight panel on the left the children appear to be patiently waiting for something to happen. The nighttime panel shows the youngsters still at their post, now fast asleep.

The colors of this piece are expertly rendered. It is difficult to see in the scan because they are so light, but the subtle watercolor shades of sky and grass in the daylight panel make a stark contrast to the deep blue of the nighttime sky. The line work in this piece is whisper-thin, and this double image shows the remarkable draftsmanship and skill that Mr. Gorey possessed. This piece is signed at the lower right.
Posted by ampootozote at 6:00 AM 5 comments: