Two Gentlemen in a Library 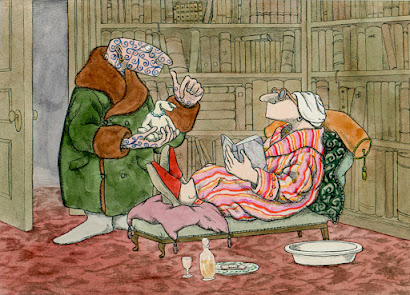 Two exciting pieces of original artwork by Edward Gorey recently appeared at auction. The first piece was created in the early 1950's and is part of a series of drawings created by Mr. Gorey the scope of which has remained largely unknown until recently. An archive of 26 related drawings from this series was discussed in my blog post here: https://goreyana.blogspot.com/2019/07/early-gorey-artwork-found.html. (The second piece from the auction will be discussed in an upcoming post.) 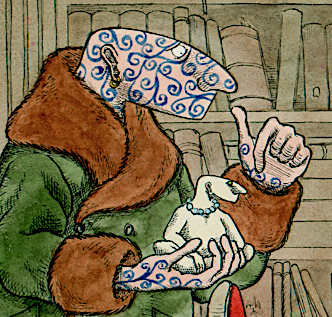 In this piece, two gentlemen are shown in discussion within a library where one of the men is in a colorful robe and slippers is settled on a chaise lounge reading a book with refreshments near at hand as if he is spending the day relaxing at a spa. The second gentleman is dressed in a fur trimmed greatcoat and is holding a small idol. He has stopped by the library to briefly discuss something with the reclining man. Even more unusual than the setting are the curling blue tattoos covering the second man's head and exposed hands. The tattoos mimic the pattern on the velvet pillow and the design of the carpet. This piece has a beautifully balanced composition and a masterful use of color. 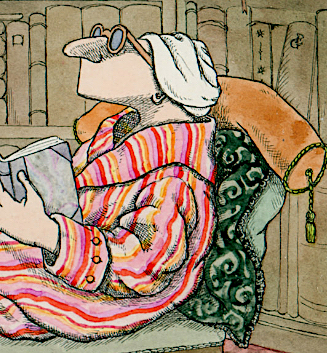 I first saw this piece at the "new" Gotham Book Mart sometime between 2004 and 2006 when it was offered to me by Andreas Brown. Unfortunately, at the time I was unable to add this piece to my collection. Mr. Brown was unsure where to place this piece in Edward Gorey's artistic timeline and he told me it was an early drawing that Mr. Gorey watercolored "for fun" in the 1960's. With the recent discovery of numerous related pieces in private collections and within the Gorey Archive, research by various people (including Mr. Brown before his passing) is revealing the correct history of this piece and Mr. Gorey's early works. 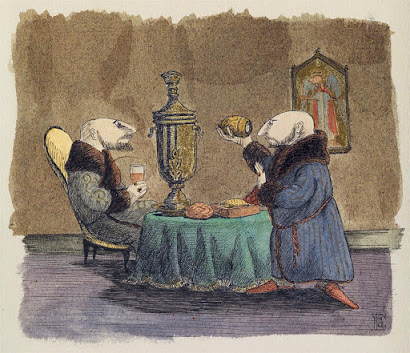 Beginning in the late 1940's, Edward Gorey created a series of wildly extravagant pen & ink and watercolor pieces. Each of these works featured gentlemen who have collectively become know as "Earbrass" in reference to the main character in Mr. Gorey's first published work, The Unstrung Harp (Duell, Sloane and Pierce/Little, Brown and Company, 1953). Viewed as a suite of drawings, it is obvious that Mr. Gorey was stretching his artist muscles, honing his technique and refining how he would create images. His figure changes in subtle ways, as does his technique, growing more confident until the publication of The Unstrung Harp. With its solid composition, fully formed figures and confident use of color, Two Gentlemen in a Library would have been completed between 1950 and 1953. 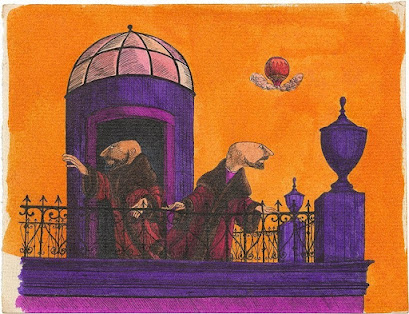 While there are many black and white drawings from this time period, Edward Gorey boldly experimented with color and subject matter in these pieces.  The Russian Tea (this piece was sold at Swann in 2019) has muted tones of brown, blue, green and purple, while Orange Sky (a piece in the Gorey Archives that was featured on Instagram and Facebook) is almost blinding in it choice of saturated color. It should be noted that these works were not titled by Mr. Gorey as they were created as stand alone pieces and were not part of a narrative storyline. Each piece stands alone amongst its siblings and each piece suggests an intriguing self contained narrative.

Edward Gorey often worked in the cartoon style for pieces that would appear in magazines, poster designs, and newspapers. The look is bold and less detailed than his traditional drawing style for a reason - these images would be printed smaller or considerably larger than the artwork itself and for the image to "read" properly the details are simplified. The cartoon style often includes shots of bright watercolor details that would make the image "pop" on the page.

Two pieces included in the sale were (most likely) created for The Harvard Review. Each drawing shows formally attired people with brightly colored plungers presumably covering holes in the floor and walls. The first drawing shows a man and a woman working to plug up holes in a confined space, while in the second two couples are being menaced by giant snakes as they work. The attire and look of the people in both drawings calls to mind 1960's British "mod" fashions which Edward Gorey often used to costume people in his magazine illustrations. The first, smaller vertical drawing is now in my personal collection.

Posted by ampootozote at 3:00 PM No comments: