The Duke of Palermo 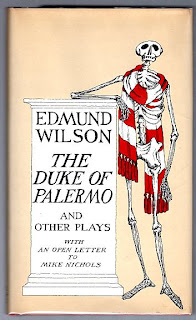 It is always fun to seek out book stores while traveling to other cities and to see what you might be able to find. I recently traveled to Milwaukee and Chicago and found a couple Edward Gorey illustrated titles that I did not have in my collection. It can be amazingly easy to spot a Gorey-illustrated book on a shelf since the spines usually have Mr. Gorey's distinctive hand rendered type.

One book I found is by literary critic and writer Edmund Wilson which has a wonderful Gorey cover design. The skeleton on the cover seems to have mugged The Doubtful Guest and made off with his scarf! 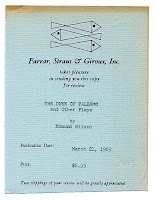 The Duke of Palermo, and Other Plays, with an Open Letter to Mike Nichols is a collection of three short plays by Edmund Wilson. It was published in 1969 by Farrar, Straus & Giroux, Inc., New York. Mr. Wilson is infamous in Gorey circles as the man to whom Edward Gorey dedicated The West Wing (see my posting from November 29, 2008 for details). Mr. Wilson also wrote The Rats of Rutland Grange which Mr. Gorey illustrated. This copy is a review copy in pristine condition with the original review slip laid in. It is amusing to see the notation at the bottom of the slip which asks for "two clippings of your review" to be sent, since these were the days before computers.
Posted by ampootozote at 6:47 AM No comments:

The Chessmen of Doom 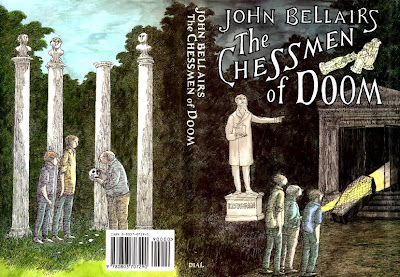 The Chessmen of Doom is the second book by John Bellairs to be published in 1989. As with the other titles for this series, it was published in hard cover with an illustrated dust wrapper by Dial Books for Young Readers.

For this title, Edward Gorey created a beautiful wrap-around dust jacket design. Mr. Gorey's watercolor and ink design is a return to his heavily crosshatched style of illustration, and the original artwork was made available for purchase. I saw this wonderful piece framed in a booth at several book fairs when a rare books dealer was offering the piece. 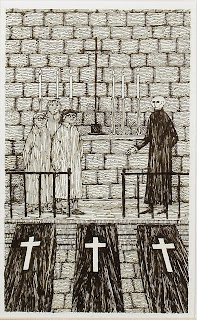 For this title, Edward Gorey created a piece of artwork that is my favorite frontis illustration from the entire Bellairs' series. When Mr. Gorey decided to sell his Bellairs art holdings, I was thrilled to find it amongst the pieces being offered, and this became the first "Bellairs" piece or art which I purchased. I love everything about this illustration. It is detailed, creepy, humorous, and even a little religious! It has all the bells and whistles for a Bellairs or Gorey collector.
Posted by ampootozote at 6:00 PM 3 comments: 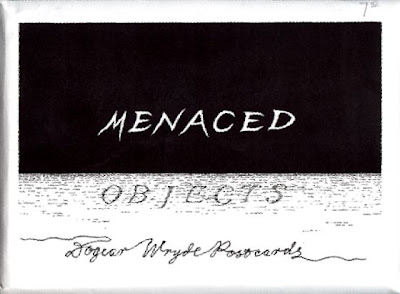 Edward Gorey created many postcards over the years, both as individual cards and as themed packs. In 1989, he published Menaced Objects, Dogear Wryde Postcards, a postcard set that consists of 16 illustrated postcards issued in an illustrated envelope. This collection shows objects in situations which usually appear to be harmless enough - until you read the captions on the reverse side of each card. 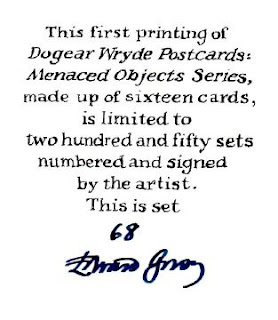 The postcards were available as a signed, limited edition of 250 numbered packs, and were also sold as a "trade" edition which without the limitation. The limitation appears on a separate colophon card in the pack. Surprisingly, the set is signed by "Edward Gorey" and not "Dogear Wyrde". I have a regular trade set, and am showing set #68/250.
Posted by ampootozote at 6:00 AM No comments: 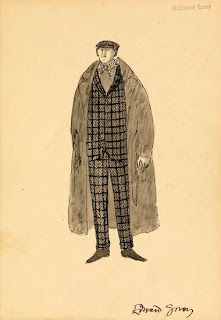 On Tuesday June 8, Swann Auction Galleries in New York City sold a costume sketch by Edward Gorey for the 1977 Broadway production of Dracula. Created for the character Jonathan Harker, the costume design was originally presented to actor Alan Coates who portrayed Harker in the stage play. For the Broadway production, Mr. Gorey presented each actor with a costume sketch for his/her character. The full color rendering is signed lower right by Mr. Gorey.
Posted by ampootozote at 6:00 AM 2 comments: 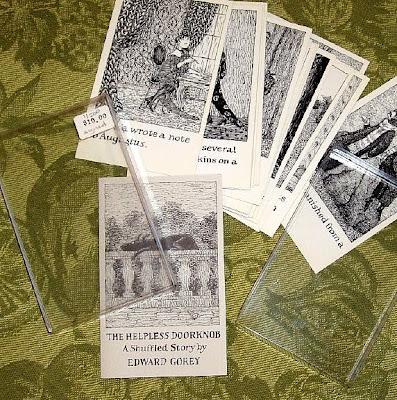 Edward Gorey's The Helpless Doorknob: A Shuffled Story was published in 1989 as a set of 20 laminated cards in a clear plastic box. The first edition of this card pack was issued as a signed, numbered, limited edition of 500 sets. The colophon page is an additional, illustrated, folded card. I am showing copy #317/500.

This is yet another interactive Gorey title, and proved to be very popular. The participant shuffles the cards (or throws them in the air) to create new stories. There was a second printing as well as a third edition of 500 copies. Only the first edition is signed and numbered on the colophon page. 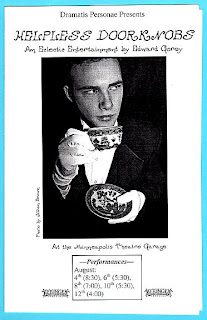 About seven or eight years ago, Dramatis Personae presented Helpless Doorknobs as part of the Minneapolis Fringe Festival for five performances. Giving Edward Gorey credit as author in the program notes, the director states,"The original text by Edward Gorey came from a collection of cards with simple events and illustrations...Mr. Gorey later transformed it into a one-page dramatic text including twenty scenarios, but without any specific structure, encouraging each production to develop its own vision."

I am still not sure where this theater company (this is the only production I am aware of for them) acquired access to the "one page" manuscript. The theater piece was produced after Mr. Gorey's death and they do not appear to have worked with the estate. After seeing the production, I mentioned it to Andreas Brown and he was unaware of the performance of this play.

The Trolley to Yesterday 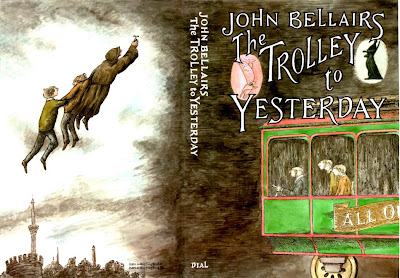 Similar in painting style to The Eyes of the Killer Robot, Edward Gorey's wrap-around dust jacket art is not up to par with most of the other color covers in this series. The front cover portion of the dust jacket art looks undecided and rushed. I do like the painting on the back cover illustration, which has delicately placed clouds. I am not aware of this original dust jacket artwork being sold by Mr. Gorey through Gotham Book Mart when he sold the other art from this series. 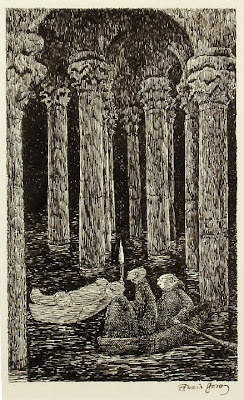 The original art for frontis illustration for this title is part of my collection. For this illustration, our three travelers glide past "themselves" lying pale, cold and dead in a boat in an underground pillared lake. This heavily crosshatched drawing is remarkable for the deep black shadows which were created by line work and not in-painting. This is a drawing that is diminished when printed in the book because all the crosshatching blurs into solid black on the printed page. This drawing is signed in ink by Edward Gorey. 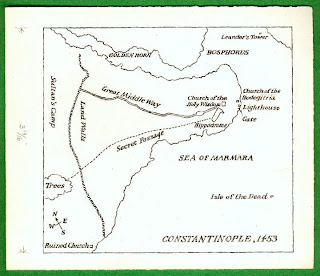 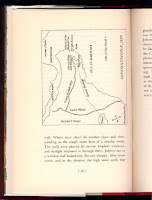 I also own the original art for hand drawn map of Constantinople that appears in the book. The map is a fantastic example of Mr. Gorey's deft skills at cartography. Mr. Gorey misspelled several words on this map and had to correct the art for publication. This is also a rare instance in which Mr. Gorey drew an illustration larger than it was intended to be printed because of the amount of lettering involved. In the book, the map is printed on its side at 3 13/16". The art is drawn at 5.25" with the notation for reduction penciled in (see photo above).

At one time, I also owned two small drawings that appear as interior spot illustrations for this book, but I sold them some years ago to another collector. The two illustrations were drawn on a single piece of illustration paper.
Posted by ampootozote at 6:00 AM 1 comment: