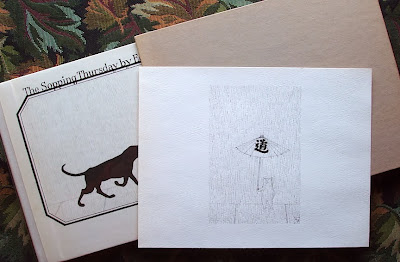 This Christmas marks a milestone for my Edward Gorey collection. With the addition of the Deluxe Edition of The Sopping Thursday, I have now completed my "A Collection" books by Mr. Gorey. My partner Bill surprised me with lettered copy "M" under the Christmas tree. I am still missing a few lettered copies of other titles here and there, but since the only difference between these copies and the numbered editions is a letter rather than a number on the colophon page, I do not feel they are necessary for my book collection to feel complete.

The 26 lettered copies are specially bound in hardcover, slipcased and each contains an original drawing with a corresponding letter. The letter/limitation is positioned in the lower right hand corner of each drawing, together with Edward Gorey's signature in initial form. 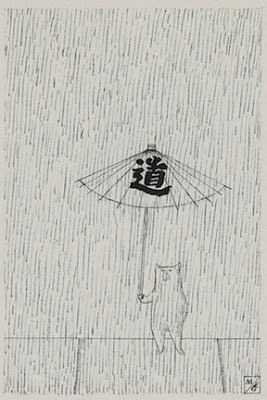 The artwork for my copy shows a cat standing in the rain with a Chinese umbrella which is decorated with a large symbol. The Chinese symbol on the umbrella represents "a method, a way to do things, and/or a path" depending on your interpretation. This is very appropriate for the story of the book. The pen & ink artwork is executed in grey and black ink which gives the rain in the drawing a wet, oppressive feel. The cats appearing in the published story are realistically drawn, while the cats which appear in the 26 drawings are often strange hybrid animals with large human noses. To see the drawings which accompanied the lettered books, see my posting from March 26, 2009.
Posted by ampootozote at 7:46 AM No comments: 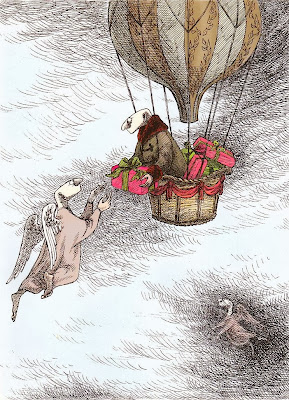 Posted by ampootozote at 6:42 AM No comments: 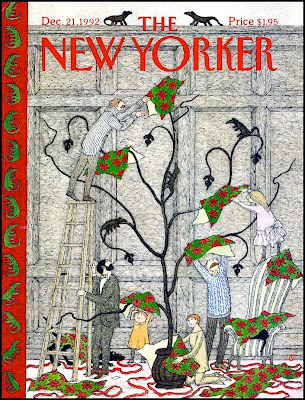 This wonderful Christmas image was published on the cover of the New Yorker Magazine for the December 21, 1992  issue.
Posted by ampootozote at 6:48 AM No comments: 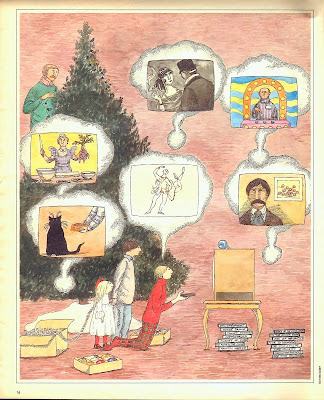 This Edward Gorey illustration appeared in the New York Times in December 1984. While the father works on lighting the Christmas tree, his helpers are glued to the television set trying to decide what program to watch. It should be remembered that there were far fewer channels in 1984 than there are on television today. Of course, if Mr. Gorey were illustrating this scene today, the kids would be looking at iPads or Smartphones!

I particularly like the piles of VHS tapes stacked up around the television (no DVD or Blue Ray in 1984). Mr. Gorey was an inveterate taper of TV programs and two of the programs (To The Manor Born & Fawlty Towers) are particular favorites of mine.

Posted by ampootozote at 6:17 AM 2 comments:

For the curmudgeons amongst us, Quentin Crisp's essay entitled Avoiding Christmas is a wonderfully grouchy approach to the Holiday Season. Appearing in the New York Times on November 15, 1987, Mr. Crisp's writing is illustrated with a charming color drawing by Edward Gorey. The drawing looks as though everyone is having a jolly time until you realize that it is inspired by the sentence, "You may even find yourself wearing a paper hat, pulling crackers and crawling around on the floor with other people's children". To read the full piece you can go here. 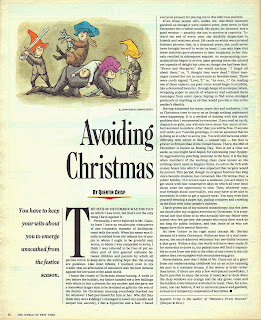 Mr. Crisp was born on Christmas Day in 1908 and managed to avoid his 91st celebration of the Yuletide Season by passing away on November 21, 1999.
Posted by ampootozote at 8:49 AM No comments: 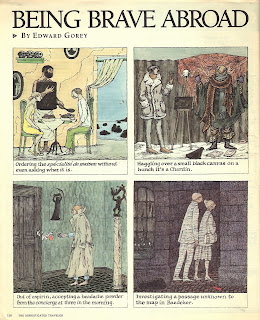 This Edward Gorey Being Brave Abroad travel segment appeared in the New York Times in March 1986. This four panel color format was used by Mr. Gorey on numerous occasions and several of these "outings" are included in Amphigorey Again.
Posted by ampootozote at 10:15 AM 2 comments: 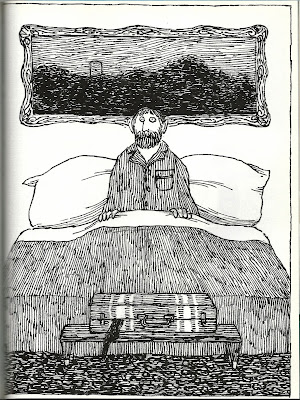 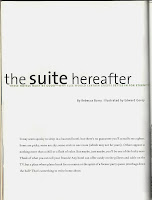 This time of year is often filled with travel to visit family and friends, but what if your travel plans could include visits with departed souls? No matter which part of the world you visit, you will always find tales of supernatural happenings and there are a handful of hotels that are reported to be haunted.

If you decide your vacation would not be complete without one of these spooky accommodations,  the June 1998 Travel & Leisure Magazine published an article listing a handful of haunted hotels. Of course, the article is illustrated by Edward Gorey!

The illustrations by Mr. Gorey feature disturbed guests with wide stares. This should not be a surprise since they have all just seen ghosts in their hotel rooms, lobbies, and elevators! The illustrations are simply presented with humor that matches the writing style of the article. 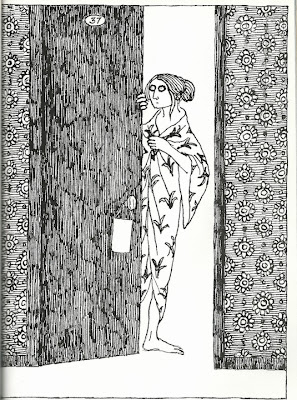 Posted by ampootozote at 7:49 PM 5 comments: