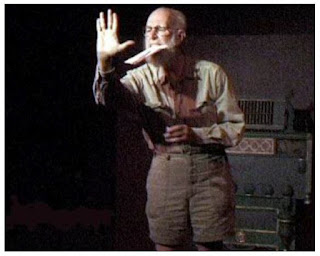 "I will be 11 next Tuesday", says the Telegraph Boy, adding without missing a beat, "If I live until then." - Edward Gorey, acting in a performance of his work Wallpaper in 1996, dressed in shorts, holding a telegram.

Written in an informative conversational style, Ms. Verburg recounts Mr. Gorey's interest in theater, beginning in his youth and continuing throughout his life. Her main focus is on Mr. Gorey's productions on and around Cape Cod in the 1980's and '90s. Ms. Verburg was a hands-on participant (or co-conspirator) in most of these endeavors, and she has many stories to delight the Gorey enthusiast. She reports on Mr. Gorey's creative process, directorial style, and very occasional forays into acting. She includes snippets of reviews and audience reactions to Mr. Gorey's sometimes less than linear plots.

Currently Edward Gorey Plays Cape Cod is available as an e-reader only. This format has the advantage of having highlighted areas of text which will take the reader to websites for additional information, photographs, and video links referenced in the text. Even without this high tech option, I hope this book will become available as an in-print version in future so it can join the other reference books about Edward Gorey on my shelf, and have the added exposure of being for sale at bookstores and museums like the Edward Gorey House.
Posted by ampootozote at 3:09 PM No comments:

"The Many Deaths of Edward Gorey" Ballet 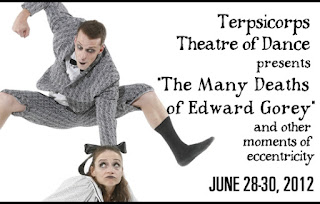 The Terpsicorps Theatre of Dance presented an expanded version of their original ballet, The Many Deaths of Edward Gorey in Ashville, NC in late June. The ballet, choreographed by Heather Maloy was originally presented by the troupe in 2007. While the live performances have ended, there are a couple video extracts presented on YouTube.

Posted by ampootozote at 5:06 PM No comments:

In the Spring 2012 issue of the British magazine Illustration, Edward Bradford wrote an informative article about the postcards created by Edward Gorey. Mr. Bradford, the official Edward Gorey bibliographer, follows Mr. Gorey's postcard images from The Broken Spoke in 1976 through the end of his career.

The Broken Spoke (see my 3 postings regarding this publication from August 2009) was first published in the June 14, 1976 issue of Sports Illustrated as Cycling Cards. Shown in the magazine are are a handful of postcard images all relating to the sport of cycling, supposedly created by Dogear Wyrde (a Gorey pseudonym) and collected by Mr. Gorey. 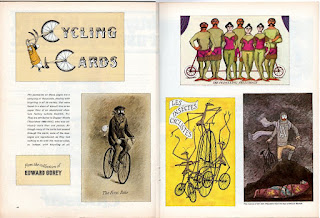 According to Mr. Bradford, Mr. Gorey was encouraged to publish these images in book form by Andreas Brown, owner of The Gotham Book Mart in New York City. The book was published in October 1976 with a total of thirty postcard images. In his article, Mr. Bradford says it is unclear if the additional book images were created specifically for the book, or if there were simply too many images for the article. Since the original artwork from The Broken Spoke was sold by Mr. Gorey through Gotham, it is not in the Gorey archives to reference to answer the question. 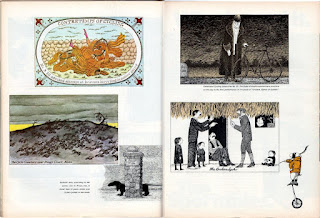 After reading Mr. Bradford's article, I obtained a copy of the magazine to see which images were shown in the article. I own two pieces of original artwork from The Broken Spoke, and found out that one of my pieces, Bats & Bicycles is not included in the article. When creating artwork for his "A Collection" books, Mr. Gorey would put the date he began and completed each piece of artwork on the back of each drawing. Looking at the back of the Bats piece of art, I found the dates 8/20/76 8/20/76, so we now know that additional artwork was created specifically for the book...And we know what Edward Gorey was drawing on August 20, 1976!
Posted by ampootozote at 7:25 AM No comments:

Time is running out to go and see the Gorey Preserved Exhibition at Columbia University in the Butler Library in New York City. For more information on this wonderful Edward Gorey show, see my post from April 17, 2012. Gorey Preserved closes on July 27th.
Posted by ampootozote at 4:18 AM No comments: 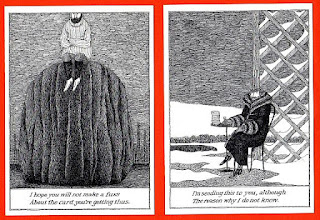 Edward Gorey loved postcards. He created postcards, collected postcards, and promoted the concept of postcards. I believe that his love of the format stems from the fact that a postcard is a stand alone, single image which tells a complete story in itself. While he often created and published postcards in themed sets, the images themselves did not have to relate to a story or to one another specifically. 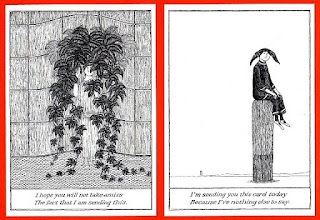 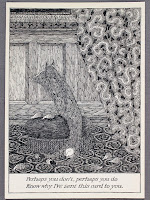 Mr. Gorey created many sets of postcards, beginning with The Broken Spoke published in October, 1976 - see my postings from August 2009. Many of the subsequent postcard sets published by Mr. Gorey have already been discussed throughout this blog, but there are additional postcard images which were created outside of the "official" publication list.

Mr. Gorey often created advertising postcards for theatrical productions, book publications and art exhibitions. He also created a wonderful postcard for The Gotham Book Mart which looks like something of a puzzle when first encountered (see image to the right). Both sides of the card are printed with cats holding blank banners, each of which is meant to be written in by the sender. 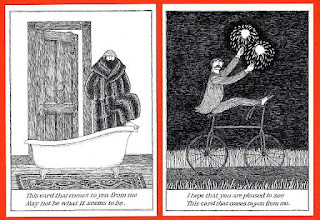 In 1982, Mr. Gorey created twelve postcard images that were published by a Dutch firm and were reissued in 1998 by Artpost in New York (see all other images on this post). These 4.25" x 6" cards have fantastically detailed images which all poke fun at postcard writing itself. Each is captioned along the bottom with a rhyme relating to the mailing of the card. Because of the way these cards were published, this set is often not considered to be part of the official Gorey publishing/collecting canon, which is unfortunate. 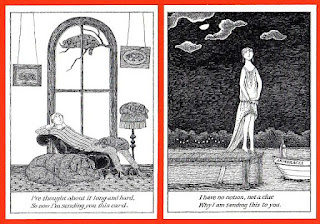 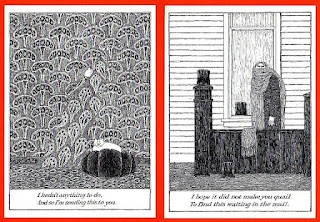 Posted by ampootozote at 7:46 AM 2 comments: 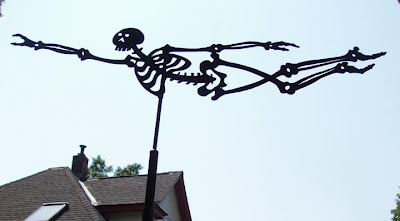 In a rare expression of self indulgence, Edward Gorey designed a Skeleton Weathervane for his home in Yarmouthport, MA, and commissioned a local blacksmith to fabricate the piece. Notes on the artwork indicate that the weathervane was designed before Mr. Gorey moved into his new home on Strawberry Lane. Installed atop the barn behind the home, the original example was soon stolen, never to be seen again. Mr. Gorey then had the blacksmith create a second example, but this piece was never installed. Virtually unknown, the replacement piece was found inside the barn after Mr. Gorey's death in April 2000. 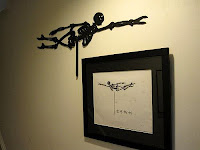 After finding the piece in the barn, the second example was permanently installed inside the Edward Gorey House as part of its museum display. The original artwork was also found, framed, and put on display. In October 2006, the Edward Gorey House commissioned local artist Steven Swain to create a third example which was auctioned as part of a fundraising gala at The House.

Due to the interest in this extraordinary piece of Gorey memorabelia, The Edward Gorey House now offers the weathervanes on a commission basis. These are not "reproductions", but rather each weathervane is one of a series, hand made by Mr. Swain. Each comes with a fine art quality print of the original artwork as well as the N, S, E & W that was designed by Mr. Gorey. Each print has a Roman Numeral designation. I purchased a Skeleton Weathervane many years ago, and it currently resides on a side table in my living room. I have Roman Numeral print #2 - I believe  RN print #1 accompanied the weathervane that was auctioned. 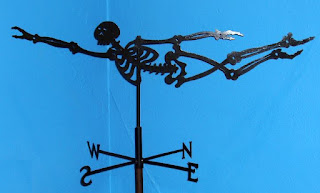