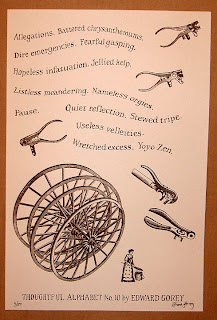 While not technically "books", Edward Gorey's Thoughtful Alphabets were printed in 1996 as limited edition posters, or broadsides. The set consists of six alphabets, each hand lettered and illustrated with clip art images. This style of illustration seemed to appeal to Mr. Gorey at this time, and the graphic quality of the broadsides is strong. 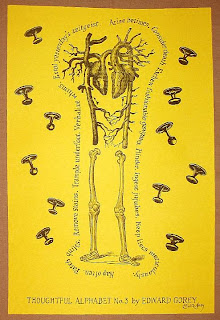 The 12" x 18" broadsides were published in two limited editions, and because of their size and graphic impact, they are suitable for framing.

Printed on white paper in an edition of 100 signed and numbered copies, this edition was sold as a set of 6 alphabets. I am showing one print from set #9/100.

Printed on brightly colored paper - each broadside is a different color - in an edition of 300 signed (unnumbered) copies, the colored broadsides were sold individually. Regardless of how they were originally offered, the Thoughtful Alphabet broadsides are now often sold as single "prints".
Posted by ampootozote at 7:11 AM No comments:

The Hand of the Necromancer

The Hand of the Necromancer was published in 1996 by Dial Books for Young readers. It is the first book in the "John Bellairs" series to be written entirely by Brad Strickland. Using characters and working on new plot lines inspired by John Bellairs, Mr. Strickland begins shaping the series solo at this point. 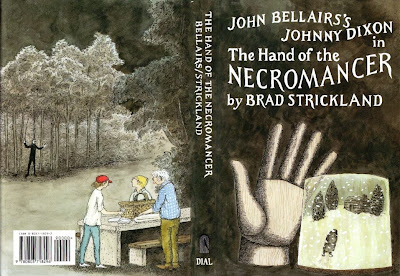 Once again, Edward Gorey has created a color wrap around dust jacket painting and a black & white frontis illustration for this title. While perfectly serviceable, Mr. Gorey's work on this book lacks a spark of inspiration and drama he exhibits on other titles from the series. 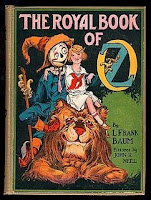 It is not unusual for a popular book series to continue after the death of the original author. L. Frank Baum wrote fifteen Oz books beginning with The Wonderful Wizard of Oz, published in 1900. Mr. Baum died in May 1919, and his two final books were published after his death (The Magic of Oz in 1919 & Glinda of Oz in 1920). In 1921, the publisher continued the series with author Ruth Plumly Thompson. Unlike the Bellairs series, Miss Thompson's first Oz outing, The Royal Book of Oz, was published under Baum's name. She would go on to publish 19 titles in the series. Another similarity between the Bellairs and Oz book series is the continuation of the illustrator (Edward Gorey for Bellairs, John R. Neill for Oz), giving the books a cohesive look after the change of authors.

For more information on the Oz book series, go to theozenthusiast.blogspot.com.
Posted by ampootozote at 6:24 AM No comments:

In 1986, Edward Gorey created a suite of collagraph prints entitled Elefantomas (hmm, sound familiar? Like Fantomas perhaps?). Housed in a cloth covered portfolio with ties, the set consists of 9 prints, plus a signed colophon page. Published in an edition of 26 lettered and 10 Roman numeral sets, Elefantomas is a quite scarce Gorey collectible. The images below show one of the lettered sets, and the photographs were sent to me by a collector.

The two editions are actually quite different from one another. For the 26 lettered copies, each print is signed and lettered individually to match the colophon page. The 10 Roman numeral sets consist of "ghost images" of each of the prints. These "ghosts" were achieved by laying a second sheet of paper on the printing plate once a print was pulled without re-inking the plate. The resulting prints are lighter and less well defined than the lettered edition. For the ten Roman numeral sets, only the colophon page is signed and numbered. The individual prints are not marked. 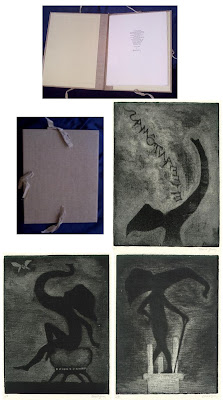 Posted by ampootozote at 6:57 PM 2 comments: 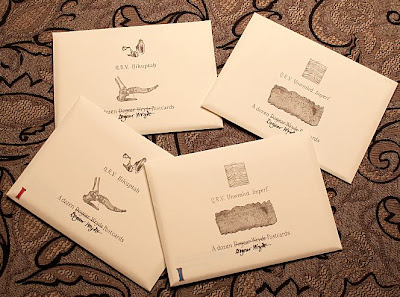 Each of the 12 cards in the envelopes feature Q.R.V. verses which have been hand lettered by Edward Gorey. The accompanying images however are various "cut and paste" medical, advertising, insect, and miscellaneous images which can be found in numerous books of clip art. Often amusing, the images compliment the verses in unique ways.
Posted by ampootozote at 7:00 PM 2 comments:

This article about Edward Gorey appeared in the New York Times.
Posted by ampootozote at 6:54 AM 4 comments: