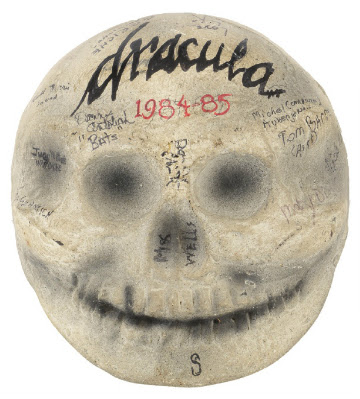 You never know where unusual Edward Gorey collectibles will turn up. The September 25 memorabilia auction at Profiles In History included items from the estate of actor Martin Landau. Mr. Landau led the 1984/85 touring production of Dracula, with set and costume designs by Edward Gorey. As a souvenir of the production, Mr. Landau had a piece of the set signed by the production's cast and crew. 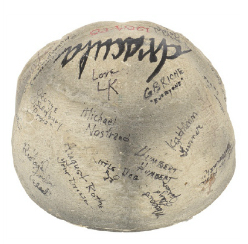 Edward Gorey's sets had multitudes of bats and skulls scattered about the three interiors. For Miss Lucy's bedroom in Act 2  these skulls were used as drapery stays at the window as as part of the elaborate bed hangings. The skulls are constructed in cast fiberglass with a wooden backing. The surface has been airbrushed  for use on the set. At 7" x 8" x 5", the skull is an impressive Gorey/Dracula/Landau cross reference collectible.

Posted by ampootozote at 6:30 PM No comments: 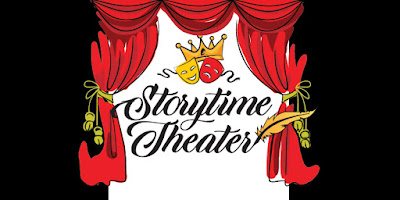 If you reside in St. Louie and are looking for a little mid morning diversion for your children between now and Halloween, you can visit a local library where the Storytime Theater will present A Delightfully Gorey Tale For Tots. The performances are free and will be performed at different libraries in September and October. For the locations and schedule, visit www.slpl.org/news/storytime-theater-a-delightfully-gorey-tale-for-tots

Posted by ampootozote at 6:30 AM No comments: 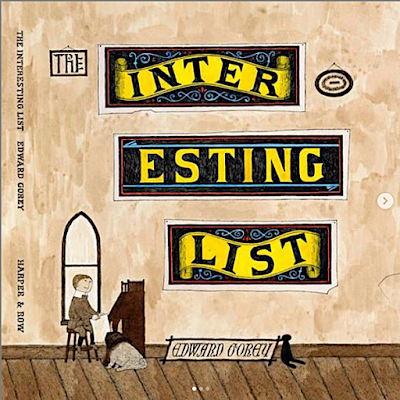 
Posted by ampootozote at 6:19 PM No comments: