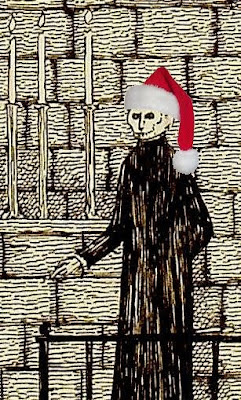 I hope everyone has a Merry Gorey Christmas!

The Twelve Terrors of Christmas 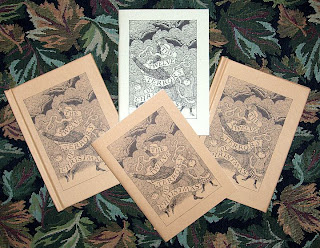 The Twelve Terrors of Christmas, written by John Updike and illustrated by Edward Gorey, was an instant success for Gotham Book Mart. Both men must have gotten tired of signing their names inside the various limited editions of this title - in 1993, GBM published two separate editions of this book with a third edition in 1994!

This delightful book is for anyone who gets a little too stressed out each December. The twelve biggest pitfalls of the Christmas season are comically outlined by Mr. Updike, and Mr. Gorey's artwork will make you laugh out loud.

Published concurrently in 1993 was a deluxe edition of 126 hardback copies and a limited edition of 500 copies in wrappers (paperback). The deluxe copies have an illustrated tan paper cover and no dustwrapper. These copies consist of 100 numbered and 26 lettered (A to Z) copies. I am showing copies Z/26 and #26/100.

The first limited edition printing from 1993 consists of 500 numbered copies in tan wrappers. I am showing copy #404/500.

This title proved to be so popular that in 1994 a "first trade edition" was published in pale green wrappers. This edition was not generally signed by Mr. Updike, but GBM managed to get the author to sign a few copies. The book I am showing is signed by both author and illustrator on the title page. Below, I am showing the announcement card for this publication. 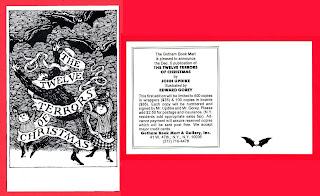 The Twelve Terrors of Chrismas remains popular today. In 2006, Pomegranate came out with a hardback reprint (with green covers) that is still available.
Posted by ampootozote at 7:22 PM 1 comment: 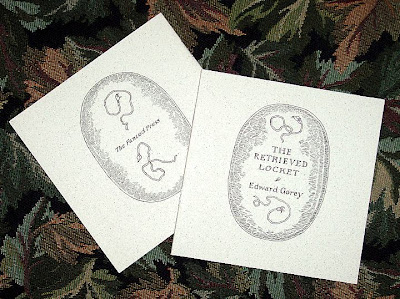 Published in 1994 by Edward Gorey's Fantod Press, The Retrieved Locket is a tale of loss and grief. This title was published in an signed, limited edition of 500 numbered and 26 lettered copies. I am showing copies #W/26 and #252/500. The announcement card appears below.

This story was first published as A Serious Life: The Retrieved Locket in Anteas number 75/76 in Autumn 1994. It was also included in Amphigorey Again.
Posted by ampootozote at 6:00 AM No comments:

The December 9th, 2010 auction at Bloomsbury Auctions is getting more press than usual for an Edward Gorey themed auction. This is to a large degree because of the fur coats which will be on the block this week.

There have also been several interesting Gorey discussions on line because of the added attention brought on by this auction. On one blog: http://ozandends.blogspot.com/2010/12/fur-coats-on-sale-size-extra-large.html , the topic of Edward Gorey as a "cult figure" has been addressed. What constitutes a cult following as opposed to just being popular?

Oh, and by the way...Thursday December 9th, 2010 is my 50th birthday. Maybe I need a birthday present from the auction. Hmmmm....
Posted by ampootozote at 6:01 PM No comments:

2010 has been a banner year for auctions featuring the works of Edward Gorey. The autumn sales at Pacific Book Auction and Swann Auction Galleries are behind us, but a unique auction is coming up on December 9th at Bloomsbury Auctions in New York.

This auction showcases 14 fur coats once owned and worn by Mr. Gorey, which are being auctioned individually. Also included are many bundled lots of books written and/or illustrated by EG (including one grouping of books by John Bellairs), a piece of original artwork, and ephemera. Proceeds from this auction will benefit the Edward Gorey Charitable Trust and the Edward Gorey House.
Posted by ampootozote at 6:00 AM No comments: