"Dear Peter,
I've spent most of the day drawing sordidly conceived and erratically hung wallpaper..."
-Edward Gorey
Floating Worlds, The Letters of Edward Gorey and Peter F. Neumeyer by Peter F. Neumeyer gives us an inside glimpse into the mind of Edward Gorey, in time capsule form. Published in September 2011 by Pomegranate Books, San Francisco, the book consists of letters between Mr. Neumeyer and Mr. Gorey between September 15, 1968 and October 28, 1969. 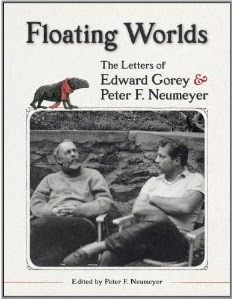 Peter F. Neumeyer is the author of (among many other publications) the three Edward Gorey-illustrated Donald books. The letters ostensibly concern themselves with the publication of the Donald books (as well as other unfinished/unpublished collaborations between the two), but this is just a springboard for numerous subjects from both writers. In one of the earliest letters, Mr. Gorey states that he usually does not collaborate at all with authors - he usually just does the art and moves on to the next project. This is not the case with author Neumeyer.

In the process of collaboration, the work and social habits of Mr. Gorey are illuminated far better than have ever been shown before. Mr. Gorey's letters are often written over days (with time and/or date notations), typed on a manual typewriter with hand notations. This was an incredibly busy time for Mr. Gorey who was working on multiple projects of his own and also illustrating books for several authors.

Floating Worlds is profusely illustrated with examples of the hand decorated envelopes and post cards sent to Mr. Neumeyer, which would be reason enough to make this a "must have" book, as would the introduction by Mr. Neumeyer. These are merely window dressing, however, to the main event - the correspondence between the two men.

In today's world of instant communication, it is hard to imagine the anticipation of waiting for a response to something you sent weeks (or more) previously. The only way to recreate this would be to read the letters as dated, but who can wait?!
Posted by ampootozote at 6:44 AM No comments:

We continue with Gotham Book Mart's 2002 list of prints created by Edward Gorey - and yes, we are getting close to the end of the list! Most of the prints shown on this post are available for purchase from The Edward Gorey House - edwardgoreyhouse.org - although some editions may be sold out. As with Edward Gorey's other prints, the editions were completed after his death and are available hand numbered with a facsimile signatures.

This grouping of prints are the "Thumb" series. I do not have any of these prints in my collection - I will admit that I find these images rather creepy. My favorites from the group is Thumbhenge and Three Thumbs Exercise. 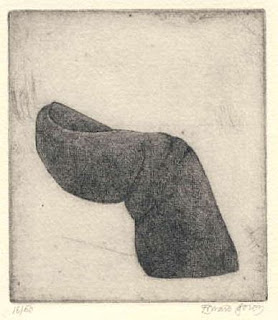 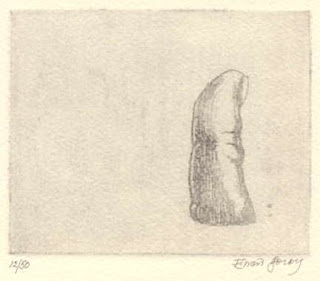 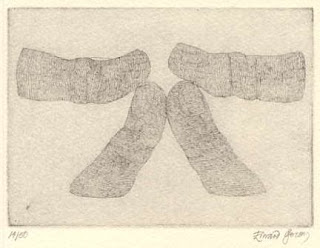 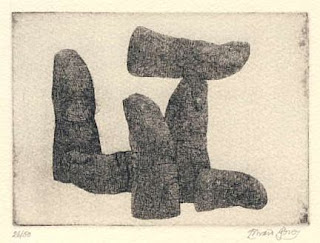 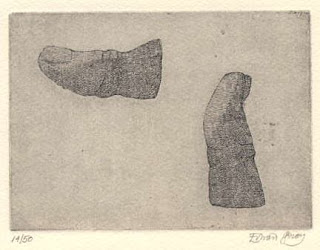 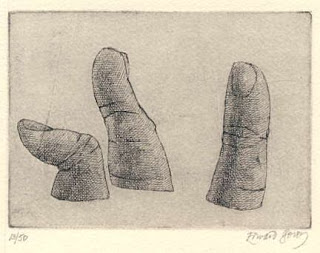 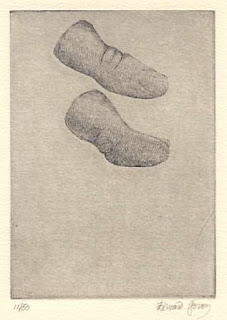 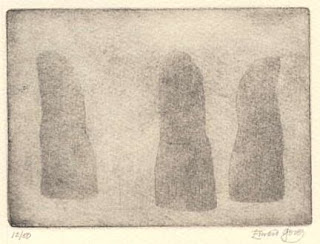 It is always fun to recognize something that influenced Edward Gorey and his works. This past week, I received a catalog from a book dealer specializing in children's literature. While perusing the offerings, I was struck by an illustration from an early American title. At a glance, it appears to be an illustration from Edward Gorey's first miniature book, The Eclectic Abecedarium. It was actually from Whittington and His Cat published by S(olomon) King, circa 1829 - 1831. 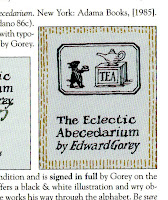 The border design and style of art are remarkably similar to Mr. Gorey's illustrations for TEA...actually, they are pretty much exactly the same. The catalog includes a second title by King, The Scripture Alphabet for Children (circa 1830's). Also included in the catalog is a copy of the Adama printing of The Eclectic Abecedarium.

Gorey was widely read and picked up influences from many different sources. It should be no surprise that some of them are recognizable!
Posted by ampootozote at 6:25 AM 2 comments: 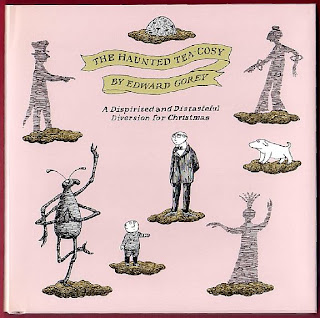 The Haunted Tea Cosy; A Dispirited and Distasteful Diversion for Christmas by Edward Gorey was published in hardcover with an illustrated dust wrapper in 1997 by Harcourt Brace & Company, New York. 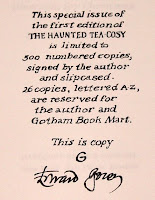 The first edition of The Haunted Tea Cosy was available from Gotham Book Mart as a signed hardcover, and as a signed, slipcased limited edition with 500 numbered and 26 lettered (A to Z) copies. The signed colophon page is tipped into the book. I am showing copies #42/500 and G/26. The announcement card for this title appears below. 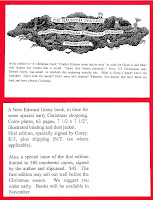 The Elegant Enigmas show included two pieces of original artwork from this book, and the art displays the simpler, bolder line quality that much of Mr. Gorey's work from this time period exhibits. It was interesting to be able to compare and contrast the art from this book to pieces created just a few years earlier.
Posted by ampootozote at 6:20 AM 3 comments: