er set of Christmas Cards that were sold around Cape Cod, whose profits from the sales were used to help people in need in that community (see my post from December 5, 2009). Here are the three Gorey Christmas images (which I have not seen reprinted). Each card has a red accent within the image, and each appears to be hand signed by Mr. Gorey.

The first shows a young girl and her cat - who is as large as she is - waiting expectantly for Christmas to arrive.

The second shows a woman and her son decorating a Christmas tree. Once again the Teddy Bear held by the child is as large as he is. Through the window in the distance, a Cap Cod lighthouse is visible.

The third card shows a muffled man taking a break from shoveling while a boy and a dog trot past. The dog has either been decorated for the holiday, or has run afoul of some Christmas decorations.
Posted by ampootozote at 6:00 PM 1 comment:

Here are a couple of Edward Gorey Christmas card images that were printed by the Gotham Book Mart in 1977. These classic Gorey scenes have become familiar over the years because they have been reprinted and sold in boxed card sets.

The first image (left) is of a man holding an enormous stack of wrapped Christmas gifts. The second (above right) shows three men transporting a holiday tree on a sled. In typical Gorey fashion, the tree with its lit candles is under a glass bell. 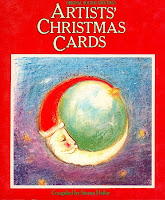 The Men with Tree was included in the book Artist's Christmas Cards, published in 1979 by A & W Publishers. Two Gorey images are included in this collection, the other being the Great Veiled Bear card (see my posting from December 19, 2008).
Posted by ampootozote at 6:00 AM 2 comments:

It seems inevitable that Edward Gorey would one day illustrate Old Possum's Book of Practical Cats (OPBoPC) by T. S. Eliot (1888 - 1965). The pairing of Mr. Gorey's signature felines and Mr. Eliot's poetry is a match that was destined to occur. 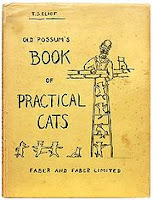 Mr. Eliot wrote the poems in the 1930's and included them in letters to his godchildren, to whom he wrote in the guise of "Old Possum". Collected together and published as OPBoPC in 1939, the first edition was printed with a cover design by Old Possum himself (the book shown to the right is not in my collection). The collection underwent several printings and has been illustrated by Nicolas Bently (1940), Edward Gorey (1982), Errol Le Cain (1986 & 1990),and Alex Scheffler (2009).

In 1981, the Andrew Lloyd Weber/T.S.Eliot musical Cats (with additional lyrics by Trevor Nunn) opened in London and one year later on Broadway. It became the longest running musical of its day, only to be outdistanced by that other Lloyd Weber/Don Black creation, The Phantom of the Opera.

The renewed interest in the OPBoPC poems generated by the musical produced a strong interest in republishing the text in a newly illustrated volume. Edward Gorey was the perfect illustrator to undertake the project. His illustrations are humorous and witty and perfectly capture the playfulness of the cats in the poems.

The first Gorey-illustrated hardcover edition of Old Possom's Book of Practical Cats (pictured left) was published in 1982 by Harcourt Brace Janovich. The book has an illustrated dust jacket and interior illustrations. In 1982, a paperback version of the book was printed (pictured right). The book proved to be popular and the first printing quickly sold out, instituting a second (also in 1982) and many subsequent printings. It can be difficult to find true first printings of the Gorey-illustrated edition which state "First Edition / A B C D E F G H I J". Both copies shown are first/firsts.
Posted by ampootozote at 8:20 PM No comments: 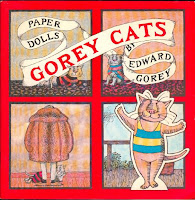 Two interactive books for children that had Edward Gorey's approval, but were put together by others are Gorey Games (with Larry Evans) and Gorey Cats Paper Dolls (with Malcolm Whyte and Nancie West Swanberg). 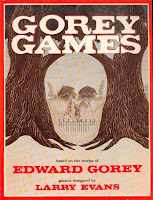 For both of these mass market volumes, illustrations by Edward Gorey were adapted into books that could be cut up or drawn in. 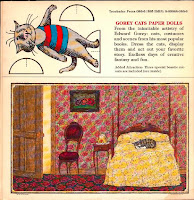 Gorey Cats Paper Dolls (1982 Troubador Press) is aimed at younger children and features a number of friendly felines which can be cut from the book and dressed in different costumes. The back of the book folds out to provide the dolls in color. 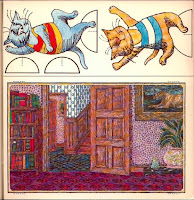 The dress-up clothes are printed in black and white and can be hand colored as the viewer sees fit. 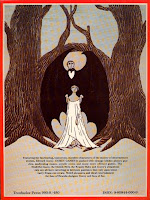 Gorey Games (1979 Troubador Press) is a book of brain teasers and puzzles by Larry Evans, all illustrated using previously published illustrations by Edward Gorey which have been adapted for the puzzles. This book was published in a limited hardcover edition of 750 copies which includes an extra puzzle and a previously unpublished drawing.
Posted by ampootozote at 8:20 PM 3 comments:

It was around 1982/83 when the idea started kicking around to have a second exhibition of works by Edward Gorey at the Minneapolis Institute of Arts. I have a friend who, at the time, was a librarian at the MIA and through him I got to know Harold (Hal) Petersen, the head librarian. The MIA had been the site of Mr. Gorey's first museum show in 1968 - see my posting from February 8, 2009 for more information on this earlier exhibition. The 1968 show was curated by Charles Paul Helsell who had donated most of his collection of Gorey books to the library (they are no longer in the archives...where did they go???).

The idea was to mount a new exhibition in the museum's library which would showcase the books the MIA had in their collection, and to expand upon this archive by borrowing from my collection of books, ephemera and original artwork. Over the course of a few dinners, Hal and I began to discuss what would ultimately become a very popular exhibition at the museum. 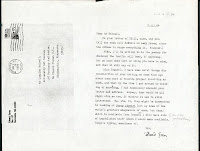 Charles Paul Helsell no longer worked at the MIA, but he was friends with Hal and still had Mr. Gorey's contact information, so he wrote to EG to find out if the museum could borrow original art from his archives. In a delightfully messy typed letter to Mr. Helsell, Mr. Gorey responds in a slightly befuddled manner to the request. Mr. Helsell retained the original letter, but gave me a copy for my files. It reads:

Re your letter of 28.ii, sure, why not. (All the work will devolve on Andy Brown, since the Gotham is where everything is. However.)

Also, I'll be willing to do the poster for whatever the traffic will bear, if anything. Let me know what sort of thing you have in mind, and what it will say on it.

Also (again), I have some awful though dim recollection of your writing me some time ago about some sort of theatre project involving my work, and that by the time I got around to thinking of answering, I had hopelessly mislaid your letter and address. Anyway, that would be all right with me too, if whoever it was is still interested. He, she, it, they might be interested in looking at Gorey Stories (not my idea of the world's greatest adaptation of same, but then) which is available from French; I also have lots of unpublished stuff which I could make available. Forgive typing, messiness of.

To my knowledge, nothing ever came of the offer to work on a theatrical piece. More on how the exhibition came together and the show itself in future postings.
Posted by ampootozote at 6:00 AM No comments: 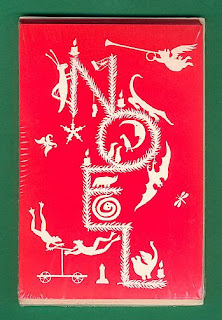 Edward Gorey created many, many Holiday images for Christmas. Most of these have ended up on cards at some time, past or present. One of the harder to find Gorey Christmas cards is a delightful silhouette image he created in 1990. Sold in shrink wrapped packs of ten around Cape Cod, all profits from the sale of these cards were used to help people in need in that community.

The image Mr. Gorey created for this card has a plethora of animals and insects cavorting around a large Noel, which has been decorated for Christmas. Joyously calling in the holiday season are a grasshopper, alligator, butterfly, snake, rhinoceros, dragonfly, bat, a many legged insect on a swing, and frogs on a railway cart.

There is also an elephant with wings and a flying pig proclaiming with a trumpet. Inside the "O" is a moon with what appears to be a family of Doubtful Guests - I suppose even the Doubtful Guest had parents!
Posted by ampootozote at 6:11 AM No comments: