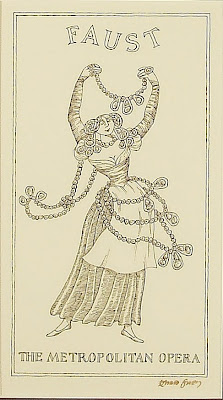 Edward Gorey was a lover of all things theatrical. He went to every performance of the New York City Ballet, took in countless films, and enjoyed live theater. Because of his extensive knowledge and interest, Mr. Gorey was often hired by the arts community to create images for merchandising items. Posters, programs, mugs, tee-shirts, note cards and towels all were adorned with Gorey's distinctive images, and were available for purchase in gift shops and catalogs.

I have one piece of original Edward Gorey artwork which was created for the Metropolitan Opera. This wonderful piece of art shows Marguerite from the opera Faust. Adorned with jewels, Marguerite is looking very pleased with herself and her situation. This was one of two pieces of original artwork (the other featuring a male opera character) created for the opera in a matching format that were supposedly printed on night shirts or tee-shirts. The artwork is hand signed.
Posted by ampootozote at 5:04 AM No comments:

In 1975, Edward Gorey created a poster for the Trinity Square Repertory Company for their Lillian Hellman Tribute, which consisted of productions of two plays which Hellman wrote. This poster has a rather curious history.

For many years, Gotham Book Mart had displayed a framed copy of the poster in their second floor gallery. The piece was always a favorite of my partner Bill's, and we asked if GBM had any for sale. After checking, we were informed that the posters must have been mislaid - the only copy they could find was the framed piece (which was not for sale). I would check every two years or so, but the posters were not to be found. 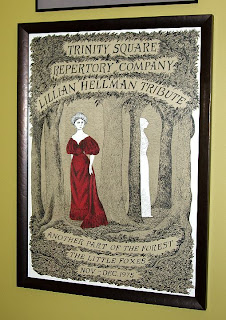 Sometime around 2000 (I can't remember the exact year, but it was after Mr. Gorey had died), one of these posters showed up on eBay. I contacted Gotham to find out if they had found them, was told the poster would soon be available, and was able to acquire one.

What happened is this: The theater was cleaning out storage space and was throwing away old posters, programs, etc. Someone not connected with the theater did a "dumpster dive" and retrieved a stash of these posters, then put one up on eBay. GBM saw the posting, contacted the seller and was able to acquire the entire stash of saved posters! It turns out that only one poster was ever sent to Gotham in 1975, and the remaining stock were in storage at the theater for over 25 years until they were saved from a dumpster!
Posted by ampootozote at 6:00 AM 13 comments:

A kind follower of this blog has forwarded a photo of a piece of Dracula Wall Paper with the Moire pattern which is currently on display at the Edward Gorey House. Here is his photo in which the pattern is clearly visible. 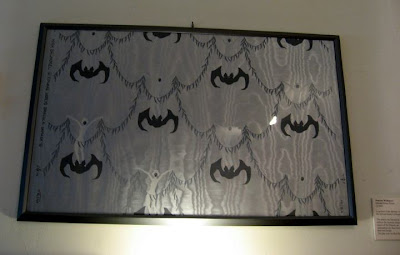 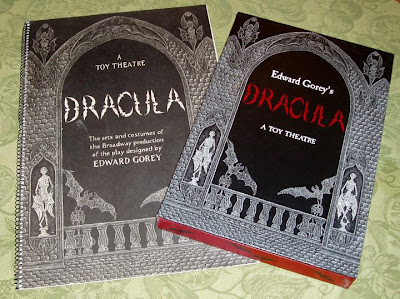 For the newly revamped Broadway production of Dracula, Edward Gorey reworked his set designs and won a Tony Award for his costume designs. The interest generated by this production put Mr. Gorey firmly in the spotlight. Up to this point in his career, he had a steadfast and loyal fan base for his books, and could pretty much get as much illustration work as he wished to take on. He was well known within many circles, but now he became...Popular!

As a direct result of his Dracula association, his work began to sell better and his public definitely wanted more "Dracula". In 1979, Edward Gorey once again redrew his set designs which were printed as Dracula, A Toy Theatre. Published by Charles Scribner's Sons as a spiral bound large format 10" x 15" book printed on heavy card stock, the Dracula Toy Theatre was presented as a book which could be cut apart and pasted together to form a facsimile of the Broadway stage set. 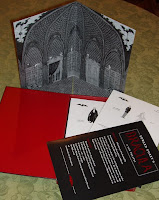 The highly detailed backgrounds for each of the three acts were augmented by furniture, rugs, and even small costumed actors, enabling the home impresario to stage their own production of the play. At one point early in my collecting career, Bill and I cut up a copy and constructed one of these toy theaters. Still floating about the house today is Dracula's coffin and a sofa from the set.

Dracula, A Toy Theatre is once again available, this time published by Pomegranate. This more user friendly version comes in a decorated box and has perforated stiff sheets, unlike the original version which had to be cut apart with a scissors. The size of the toy theater is slightly smaller than the original, but beautifully printed.
Posted by ampootozote at 6:00 AM 1 comment:

As has been mentioned before, Edward Gorey's Dracula can easily become a complete Gorey collecting sub-category unto itself. There are theater programs, advertising, photographs, posters (pictured right), tee-shirts, mouse pads, and even bed sheets!

One of the more unusual Dracula products was a line of Dracula Damask Wall Paper that was produced by Kirk-Brummel. To the left, I am showing an ad for the wallpaper. The ad has all the elements which were used in the show including the touch of red that was a signature device in each act of the show. 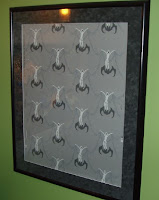 I have a three foot section of the wall paper which I have framed (right photo). Apparently, the paper came with a moire pattern (see example in ad) and plain. The example I own is plain.

The poster for the show has the distinctive image of Dracula about to pounce on Miss Lucy. This image is an iconic Edward Gorey image which has all the elements of a classic Gorey image. The drawing for the poster was reproduced as a jig-saw puzzle, once again with the distinctive red touch to enliven the scene (pictured below). 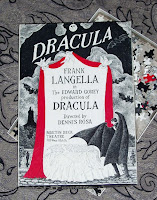 Several actors succeeded Frank Langella in the title role of the play on Broadway and on tour. I had the good fortune to have seen the original tour of Dracula. Martin Landau was the star when it came to the Minneapolis/St. Paul area. I remember how stunning and distinctive the sets were for the production. It is interesting to note that Martin Landau later went on to portray Bela Lugosi in the 1994 movie Ed Wood and won an Oscar for Best Supporting Actor in the role. He must have been warming up in the tour of Dracula!
Posted by ampootozote at 6:00 AM 8 comments:

Due to the success of Edward Gorey's Dracula on Nantucket in 1973, the production was reworked and remounted for Broadway in 1977. Mr. Gorey's original set designs had to be redrawn for a larger stage. The set designs retained the layout and essence of the original production, but more detail was added. To the left is the souvenir program from the Broadway production.

Three of the original cast members from Nantucket (Jerome Dempsey, Gretchen Oehler and Ann Sachs) made the move to Broadway with the production, but the title role of Dracula was now played by Frank Langella. Willowy, intense, and with a shock of dark hair, the unmistakably sexy Langella was a striking figure who earned a Tony Award nomination for this role. Langella repeated his role, sans the Gorey sets and costumes, in a movie version of Dracula which came out in 1979. 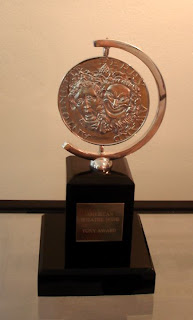 The production garnered other Tony Award nominations: Director Dennis Rosa for Best Director of a Play and Edward Gorey for Set Design. Dracula won two Tony Awards: Most Innovative Production of a Revival, and for Best Costume Design - Edward Gorey!!

Edward Gorey did not attend the Tony Awards ceremony. His award was delivered to him and he gave it away to a friend. The Edward Gorey House acquired Mr. Gorey's Tony Award and has had it on display in the house/museum for visitors to enjoy! 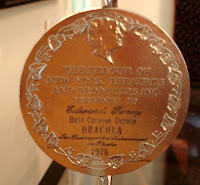 Posted by ampootozote at 6:00 PM 2 comments:

Created in 1978 as a "Dogear Wryde Postcard Set", Alms for Oblivion consists of 16 postcards in a printed envelope. There was no statement of edition or publisher for this set. The set of images was reprinted in The Betrayed Confidence in 1992. In the best Edward Gorey tradition, each card is a enigmatic story in itself. 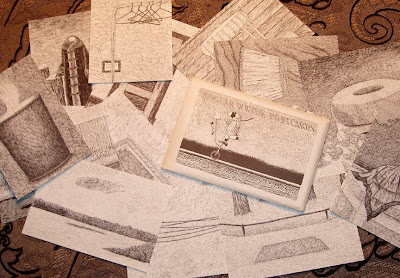 Posted by ampootozote at 7:23 AM No comments: