Glen Emil Presentation for the Library of Congress 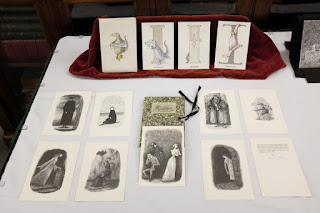 A recorded webcast presentation by Glen Emil at the Library of Congress from February 2016 is now available on line. In the forty minute presentation, Mr. Emil discusses aspects of Edward Gorey's career as well as the collection of material he donated to the LOC in 2014. To listen to the webcast, go HERE.

Mr. Emil's collection was also visited earlier this month for a private viewing organized by ComicsDC. Photographs from the visit are presented on their blog HERE.


Posted by ampootozote at 7:28 PM No comments: 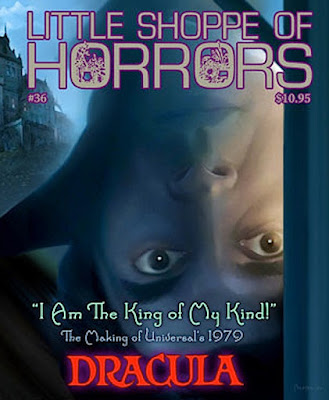 Little Shop of Horrors, The Journal of Classic British Horror Films devotes issue #36 entirely to the 1979 movie Dracula. The road to the movie begins with a Nantucket revival of the 1924 play in a high school auditorium, a production that would transfer to Broadway and make a star out of Frank Langella in the title role. The Tony Award winning revival also made a star of illustrator Edward Gorey, who designed the sets and costumes, and opened the way for his involvement in Mystery! for PBS. Even though the magazine's focus is the film, this is the most in-depth and complete recounting of how the play was conceived, produced, and produced that has been recorded.

Featuring 100 pages of in-depth, fully illustrated articles and interviews, the magazine tracks the progress from a cocktail party where, "An old drunk stumbled up to me and said, 'I hear you're going to do Dracula. You should get Edward Gorey to design it.'" (John Wulp interview), through the ultimate premier of the British-made film with its star from the Broadway production. As can be expected, there are many plot twists and turns before the stage productions or movie come to fruition.

A must for any fan of the movie or the Gorey-designed play, this magazine can be obtained from Little Shop of Horrors


Posted by ampootozote at 6:18 PM No comments: 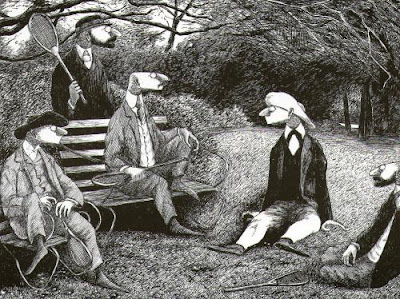 
Posted by ampootozote at 7:01 AM No comments: