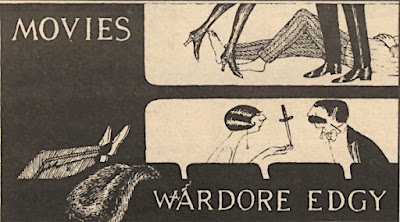 Edward Gorey went to movies. A lot of movies. All kinds of movies. He both loved to watch and playfully disparage films and the people who made them. In what can only be called a stroke of genius, someone at the Soho Weekly News gave Mr. Gorey an official platform to write about the movies he was going to see. He penned a number of movie reviews in 1974 for the publication under the anagrammatic nom de plume Wardore Edgy.

Mr. Gorey threw himself into the task with gleeful abandon. He even created an illustration for the column wherein the "critic" is lounging in a movie theater watching a thriller, his sneaker clad feet extending into the next row and his oversized fur coat casually tossed over a nearby seat.

The reviews read like a one sided phone conversation at two in the morning with an over caffeinated dandy. Most reviewers temper criticism with praise. Mr. Edgy has no such scruples and goes for the throat nine out of ten times. The reviews are chatty, catty, and occasionally non linear in thought, so eager is Mr. Edgy to move on to his next victim. The results are hilarious, and could change the way you look at some revered filmmakers and movie stars. The reviews are also written with the affection of someone who truly loves movies and can't wait to finish typing so he can head out to a theater.

The scan of this review was sent to me by a fellow collector from New York. Copies of the Soho Weekly News can be difficult to locate as it was a small localized New York City publication. The first issue was published October 11, 1973 and the final issue was dated March 10 - 16, 1982.

The last paragraph of this review, which was published March 14, 1974, reads, "Since it first came out, I have thought Mel Brooks' The Producers was the most offensive movie I ever saw; I've now seen Mel Brooks' Blazing Saddles and I no longer think this."

Twenty six drawings are put in a box and forgotten, only to be found decades later.

What sounds like the beginning of a tale by Edward Gorey is actually the history of a collection of early works by the artist. In an added Goreyesque twist to the take, the art was found by a dealer who was pursuing works by another artist. To read the full article that appeared in the Lincoln Journal Star, go HERE.


Posted by ampootozote at 6:39 AM No comments: