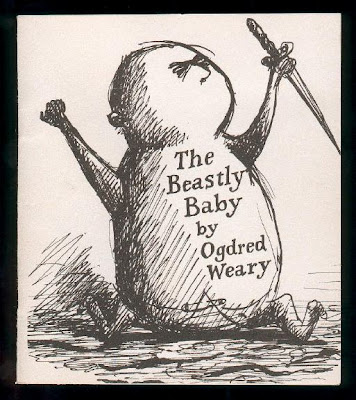 Published in 1962, The Beastly Baby was actually the first book Edward Gorey tried to shop around to publishers in the early 1950's, but kept getting rejected. Gorey shelved this story until, using the anagram Ogdread Weary, he finally self published this title to get it in print.

Founding The Fantod Press, EG began what would become a mini publishing empire unto himself. The Fantod Press only ever published limited edition works by Mr. Gorey and he would continue to publish under this imprint until 1997's The Deadly Blotter.

The Beastly Baby has all the earmarks of an early Gorey work. The drawings, while finished, are sketchy and broad in their execution. The story is startling and irreverent. The subject matter is distasteful. This book is therefore a must have for all Goreyphiles! 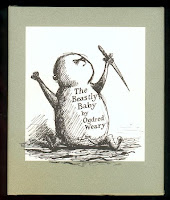 The Beastly Baby was first published in an edition of 500 copies, and can be something of a Holy Grail for Gorey collectors. This title appears in Amphigorey Too. My 1st/limited edition copy of this title is signed by Mr. Gorey as Ogdread Weary. It was not available in print (apart from being included in Amphigorey Too) until 1995 when the first hardcover edition in dust jacket was published by Peter Weed Books. The hardcover 1st has a title page drawing that does not appear in the original printing. My copy of the hardcover is signed.

There were a number of Gorey books reprinted over the years by the Swiss publisher Diogenes as uniformly sized slender paperback books. These reprints were collected in slipcased sets with a translation booklet included in each set, but these copies were never readily available in the United States. Diogenes did publish a copy of The Beastly Baby.
Posted by ampootozote at 6:00 AM