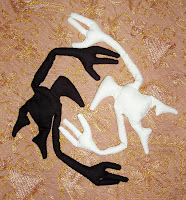 Edward Gorey first made hand-sewn dolls of his character Figbash to accompany the 26 lettered copies of The Raging Tide. Since his 1987 debut, Figbash has appeared in a series of fine art etchings, on many theatrical posters and postcards, and in an alphabet book where he contorts to form letters and numbers.

Following the publication of The Raging Tide, Edward Gorey first sold individual Figbash dolls in the lobby at the Theatre on the Bay in Bourne, Massachusetts during his production of Chinese Gossip. The dolls were made in very limited quantities and were sewn in solid black or solid white fabric. The dolls were priced at $25.00 each and all proceeds were used to help finance the the theater.

I had heard about these dolls and was able to purchase a black Figbash from the theater (via telephone). They had run out of the white version, and I was told they would try to obtain one for me. 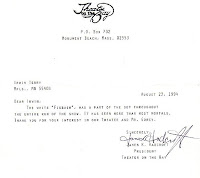 At the conclusion of the run of the play, theater director James Hadcroft sent me a white Figbash which had been part of the set from the production. Accompanying the doll was a letter stating, "It has seen more than most mortals". This white Figbash is stuffed with poly-beads, while all other Figbash dolls are stuffed with rice.

Not long after this, Gotham Book Mart heard that Mr. Gorey was selling the dolls and asked him to make some for the store to offer. Now that doll production became a small commercial endeavour, the price increased to $75.00 each and Mr. Gorey found himself continually sewing and stuffing the creatures while he watched television in the evenings. For the Figbash dolls offered through Gotham, Mr. Gorey switched from plain fabric to patterned textiles and Figbash went Technicolor (to match his colorful personality). The plain matte black and white dolls remain the earliest examples, and the "albino" examples are the rarest as only a very few were created. By late 1999, the price of a new Figbash doll had risen to $225.00. Today, prices for these rare Gorey collectibles continue to rise. 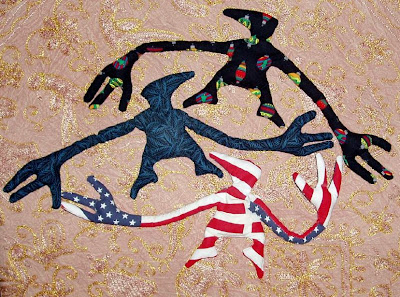 I always preferred the matte cotton fabric dolls, but Mr. Gorey often used shiny fabrics. I collected several Holiday Figbash Dolls which include a 4th of July and Christmas example. I also have a Figbash with a subtle blue leaf pattern over a black ground. 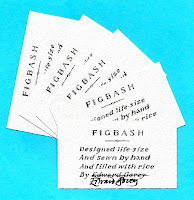 When Edward Gorey first started selling the dolls, they did not come with signed identification tags. I was told that he created the identification tags because people started asking GBM how they would know that Mr. Gorey himself sewed the pieces. When the tags arrived at GBM, Gina Guy would punch a hole in the corner and use ribbon to affix them to the dolls. I was supplied with tags retroactively for dolls I had already purchased and told I could punch them myself if I wanted to. 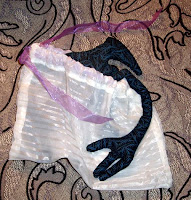 Finally, a word about preserving existing Figbash dolls. Because Mr. Gorey stuffed each doll with rice, they must be kept dry and away from pets and pests who might try to eat the rice. I have found that it is not a good idea to store them in a closed cabinet draped decoratively over books. In a closed environment, they can sometimes start to smell as they absorb the humidity inside the cabinet. It is also not a good idea to keep them inside a tightly sealed plastic bag. They like to breathe, but tend to get dusty when lounging out and about. To solve this problem, my partner Bill has sewn individual bags made of a sheer fabric with ribbon ties for my Figbash dolls so they can breathe and not get dusty. They reside in an open bowl, out of reach of our pets.
Posted by ampootozote at 6:00 AM

It's interesting to here the history of the figbash dolls. I have one purchased from Gotham in the 90's. The fabric is black with small red & white candy canes. Like you, I got my card retroactively. He's so lonely though, I wish he had friends like yours.

Figbash dolls pop up occasionally at auction - both online and at auction houses. The prices on these delightful fellows keep going up because there is a very limited supply.