The Bell, the Book and the Spellbinder 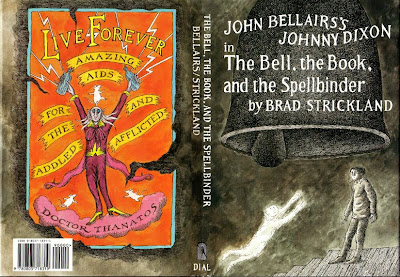 The Bell, the Book and the Spellbinder by Brad Strickland was published by Dial Books for Young Readers in 1997. Mr. Strickland is pretty much "on his own" at this point in the John Bellairs' book series, but the basic premise for this story was founded on a comment Mr. Bellairs once made to a publisher about an enchanted/magic book that enslaves its reader.

Edward Gorey created a wraparound dust jacket design that features his most colorful rear cover of the series. The lurid orange color used for the background of the tattered poster leaps out at you.

Mr. Gorey also created a frontis illustration and several small interior spot illustrations. The frontis drawing may just be his most disturbing illustration from the entire series, and possibly his career. It shows a deceased, dry mouse who still has the power to move due to magic. As the mouse tries to move, it begins to pull itself apart.
Posted by ampootozote at 6:30 AM

Wow it's really nice...Beautiful layout. Excellent work you did. I have you bookmarked to check out new stuff you post. Keep sharing more.
spellbinders