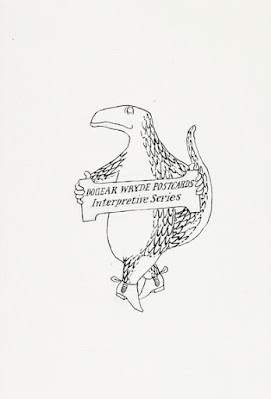 The Swann Auction Galleries June 24 Illustration Art Sale showcased an impressive array of original artworks by Edward Gorey. Six lots were offered with five resulting in sales (lot 185 Amphigorey: A Musicale. Three proscenium designs failed to meet its reserve). Four of the lots originated from The Oliphant Press printer's archives, while the remaining two lots came from a private collector. 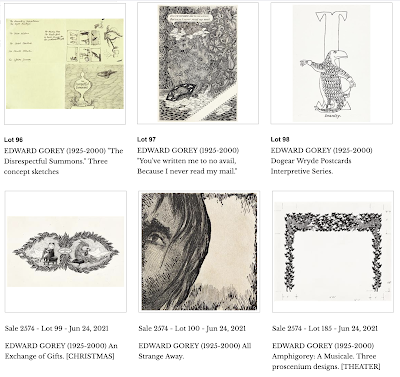 The lineup began as all art does, with a collection of concept sketches outlining The Disrespectful Summons (1971). The three pages of notes and loose drawings laid out the book visually by Mr. Gorey as he began to organize his thoughts. The lot exceeded its pre-sale estimate of $3000 - $4000, ending with a hammer price of $5000.00 (including buyer's premium). 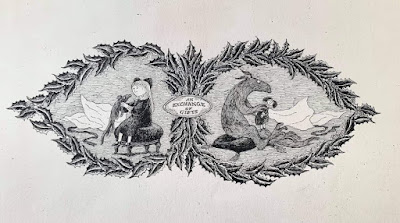 Subsequent lots included finished artwork from two books, theatrical set designs and a Christmas themed image.  Lot 99 An Exchange of Gifts (1982) was a captivatingly charming image that did very well with a final hammer price of $10,000.00 (including buyer's premium). Framed like a brooch by strands of holly, the small girl and her dog are unwrapping gifts to one another. The dog received a doll in the likeness of the girl and the girl has a doll shaped like the dog.

We will take a closer look at the three remaining lots that sold in future posts. Each of these three represent important pieces from Edward Gorey's artistic career.

Posted by ampootozote at 2:50 PM

There are now pieces of original artwork from three "A" collection books in public hands: Leaves from a Mislaid Album, The Broken Spoke, and The Interpretive Series. There is also the suite of drawings from Theoda (later redrawn and published as The Tuning Fork) which is in a private collection.