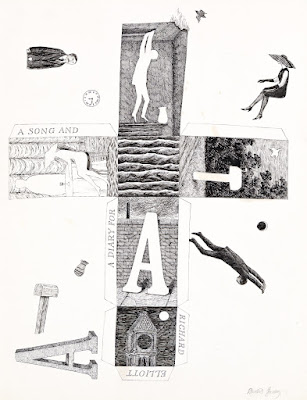 There have been a couple interesting pieces of original art by Edward Gorey to come onto the market recently. The June 9th Illustration Art Auction at Swann Auction Galleries in New York City featured an unusual piece titled A Song and A Poem for A. The artwork was created as a cover illustration in 1973 for a limited edition, staple bound book of poetry by Richard Elliott. 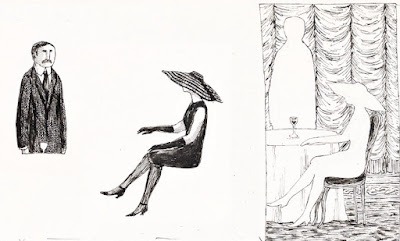 The image is a variation on a children's cut and paste toy where a box can be created by cutting out and pasting it together using the indicated flaps. Throughout his career, Edward Gorey created drawings with missing figures. This piece takes the concept a step further by providing the figures and objects to cut and paste into position on the box. While it is hard to imagine anyone actually cutting up the cover of the booklet, the viewer is engaged by visualizing the process, just as one is engaged with the writer by reading and reflecting on their poems. 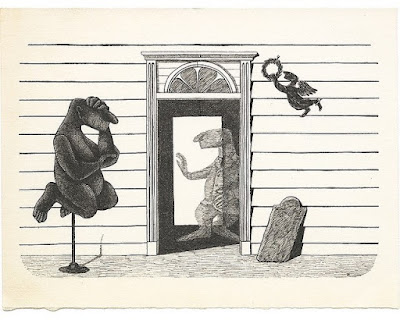 During a virtual bookfair in April, The Edward Gorey Charitable Trust released an early piece of artwork. Promoted on their social media platforms, this piece was sold to benefit the mission statement of the Trust. A most unusual piece, the art is a blend of modern art and traditional New England imagery. Life, death, mourning and the afterlife are represented poetically in this image.

Posted by ampootozote at 6:34 AM