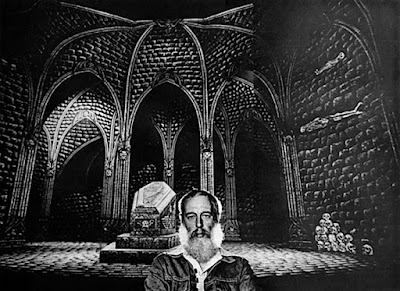 Edward Gorey's distinctive set designs for the 1973 Nantucket production of Dracula prompted an immediate discussion about transferring the show to Broadway. Whereas Edward Gorey's previous participation in set design had been in amateur and regional theater where he could be present, the construction and painting of the Broadway sets would be executed by a professional scene shop that was not under his personal day to day observation. This meant that his drawings needed to be precise and drawn to scale as the scene shop would construct the sets from the drawings and their notations. 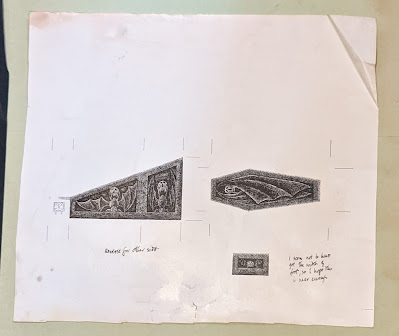 On some of the drawings, Mr. Gorey added notes saying he did not know exactly what size something was supposed to be and hoped that would suffice. Today of course, texts and emails would be flying back and forth along with a snapshot showing the problem area(s), but this was a slower, more handmade time that relied on phone calls or sending actual artwork via couriers or through the mail.

The Nantucket Dracula sets had rooms and furnishings that were relatively life sized. For the New York stage at the Martin Beck Theater, the set would now be 30' across and 30' tall which required that the set components needed to be bigger and bolder while still taking the actors into consideration. 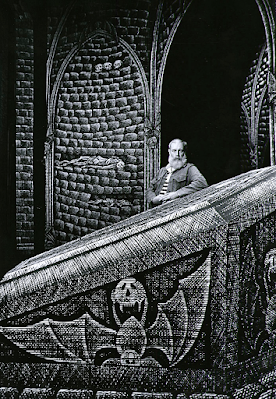 The sets for both productions were completely hand painted and one of the main stumbling blocks was enlarging Edward Gorey's distinctive drawing style to stage proportions while maintaining the integrity of the linework. Mr. Gorey combined three basic drawing styles for the sets to represent various materials and atmospheres - precise crosshatching, organic line work, and watercolor wash. 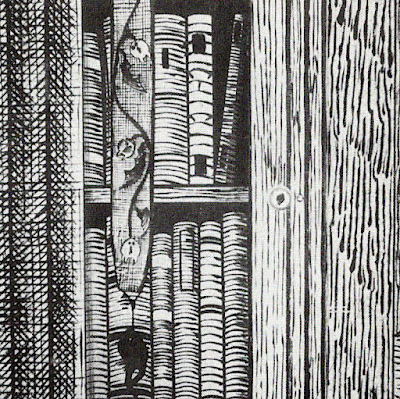 This bookcase set detail (Broadway production) illustrates all these techniques combined together. The "stone" column on the left is densely and precisely crosshatched, the wooden bookcase frame, section of paneling, and the books show several styles of organic line work, and the bell pull is watercolor washed so it looked like embroidered fabric. It should be noted that much of the set had a wash applied after the line work was completed to soften and tone the look of the set. 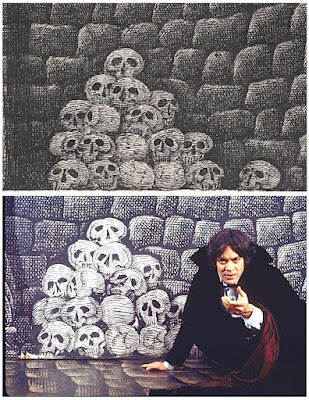 In the above photo, the top image is Edward Gorey's original artwork and the lower photo is the Broadway set with actor Raul Julia in the title role. The realized sets are masterfully painted and have the look and feel of the original artwork, but lack some of the spontaneity and density of Mr. Gorey's touch. 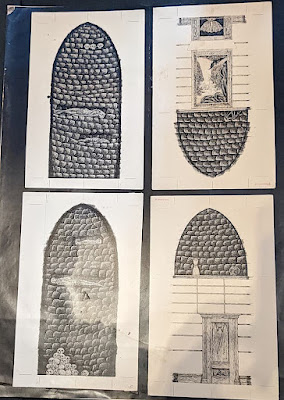 Producer John Wulp told Kevin McDermott (photographer, actor, producer, longtime Gotham Book Mart employee and friend of Edward Gorey) that the main stumbling block with the sets was to get the correct look for the crosshatching that Edward Gorey was famous for. After several unsuccessful attempts, a special tool was created that helped give the painted lines the correct look and feel. In the video below, my husband Bill and I have recreated the tool and filmed a short demonstration on how it would be used to paint the sets.

*Photographs showing Edward Gorey on the set of the original Broadway sets are by photographer Jack Mitchell. Photograph of Raul Julia on stage by Martha Swope (visit the New York Public Library Digital Collection for more photos - https://digitalcollections.nypl.org/search/index?utf8=%E2%9C%93&keywords=dracula+broadway). Set detail showing bookcase from Designing and Drawing for the Theater by Lynn Pecktal. Images of artwork from the Dracula Portfolio courtesy Russell Lehrer.

Posted by ampootozote at 8:50 AM

Fascinating and informative. Thanks for the demo!