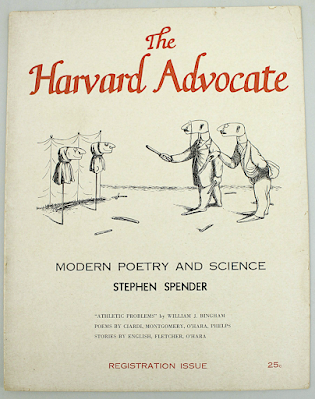 It has long been stated that the cover of the September 1950 issue of The Harvard Advocate (HA) is the first Edward Gorey illustration to appear in a published work. However – while researching Mr. Gorey's periodical cover designs, I ran across the April 1, 2021 Ashcroft and Moore (A&M) auction listing for this particular magazine. The A&M auction sold the remnants of Andreas Brown's Gotham Book Mart inventory, and Lot 44 included a second, very seldom seen HA cover design by Mr. Gorey. 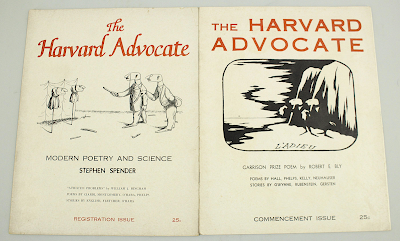 The September 1950 Registration issue is well documented and, while very rare, occasionally appears for sale. The 1950 Commencement issue is virtually unknown on the market. Looking at the titles of the two magazines, the natural assumption is that the registration issue was created/published first, and the commencement followed. Yet both are dated 1950; how can a publication that follows a single academic year have both issues published in the same calendar year? The answer lies within the magazines, on the Table of Contents pages. Fortunately, A&M scanned these pages and presented them as part of the auction listing. 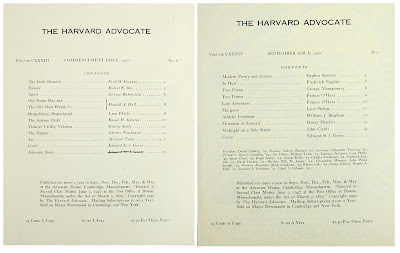 The table of contents/information page in both copies states that the HA magazine was "Published six times a year in Sept., Nov., Dec., Feb., Mar., & May". The page in the Registration Issue clearly states that this is the September 1950 issue and is No. 1 (for the 1950/1951 academic year). The other issue does not specify the publication month, but says "COMMENCEMENT ISSUE, 1950, No. 6". This means it is the final issue of the 1949/1950 school year, and would have been published in May 1950; consequently making it the first published appearance of illustration work by Edward Gorey. 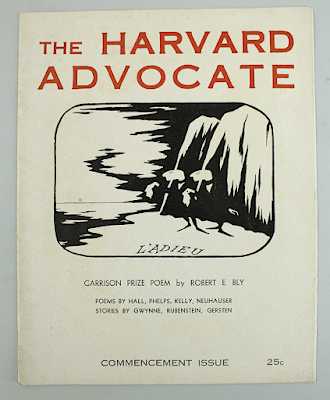 This is confirmed by the Volume numbers of CXXXIII in the Commencement, and CXXXIV in the Registration issues. It is also of interest that Edward Gorey is listed as Edward St. J. Gorey both issues.

Posted by ampootozote at 7:27 PM