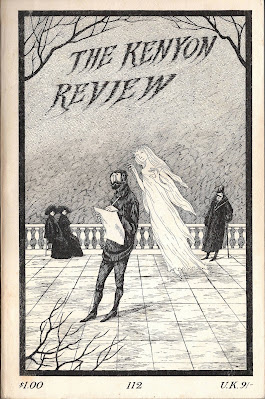 Published by Kenyon College in Gambier, Ohio, The Kenyon Review is a literary magazine that first appeared in 1939. Apart from a ten year lapse between 1969 and 1979, the magazine has been in print since its inception. In November 1966, artwork by Edward Gorey graced the cover of the magazine. Mr. Gorey also created illustrations for two stories within this issue. 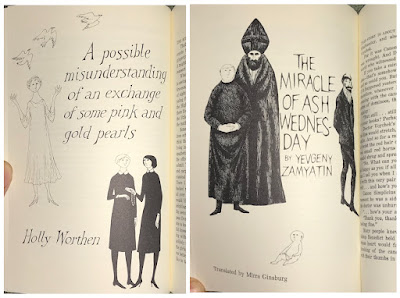 Reviewing the magazine covers Edward Gorey created over the course of his career, The Kenyon Review cover artwork stands out as one of his most successful. The image is finely detailed, yet still grabs the viewer's attention from a distance (to view all the magazine covers, reference my post from October 7, 2022 - http://goreyana.blogspot.com/2022/10/magazine-covers.html). 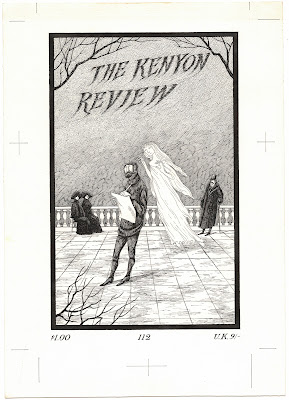 I recently acquired the original artwork for this cover design. The image shows a luxuriously bearded young man (a youthful Edward Gorey himself?) pausing on a stone terrace in his search for literary inspiration. Hovering over his left shoulder is an ethereal muse who, from the look of concentrated anticipation on the young man's face, is providing the longed for spark for his writing. Can the onlookers see the muse, or are they simply passing silent judgement at how woefully inadequate his clothes are for the obviously frigid temperatures? The scene is drawn in deep perspective, which gives the piece a theatrical atmosphere. 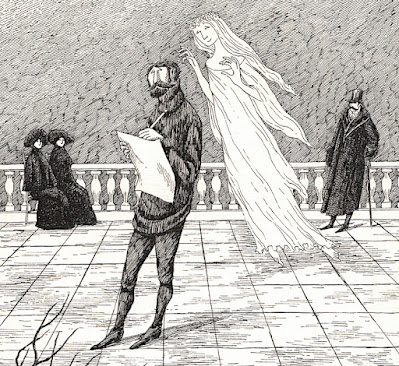 An artistic muse was clearly hovering about Edward Gorey himself when he sat down to create this piece. Using only black ink on white paper, this piece is a stellar example of Mr. Gorey's command of pen technique. The stone terrace and marble balustrade appear cold and solid against a forbidding sky that could produce rain or snow at any moment. The muse floats weightlessly while the figures in the background are stern and dark, adding no comfort to the scene. The thick black outline and encroaching branches give the sense that the viewer is observing the scene through a window. 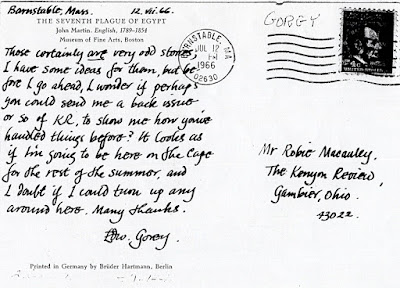 Included with the original artwork were xeroxed copies of two pieces of correspondence relating to the piece. In early 1966 Edward Gorey was in conversation with editor Robie Macauley about the possibility of providing (unspecified) illustrations for the publication. On a postcard sent in March 1966, Mr. Gorey replies to Mr. Maculey about some "very odd" stories that were sent for consideration. He requests that back issues of the magazine be sent to him so he can get a feel for the publication and how they have used story illustrations in the past.

(note: the postcard chosen by Edward Gorey shows The Seventh Plague of Egypt by John Martin, 1800. The plague was a thunderstorm of hail and fire - https://collections.mfa.org/objects/33665) 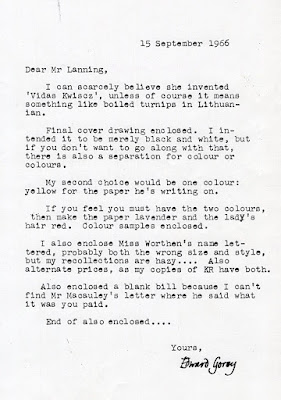 The second piece of correspondence is a letter dated 15 September 1966 from Edward Gorey to editor George Lanning. This letter  accompanied the finished artwork. Typed on Mr. Gorey's distinctive typewriter, the missive gives an illuminating glimpse as to how the illustrator worked with editors and presented them publishing choices. This willingness to give options is no doubt a holdover from his days at Anchor Publishing. In the letter Mr. Gorey gives three options for how the cover image can be used. He states that he intended the image to be black and white, but is open to having some color added for the hair of the muse and/or the paper on which the young author is writing. He also provided extra hand-lettered pieces that could be pasted onto the image, just in case he didn't get the prices correct on the art (they were correct). 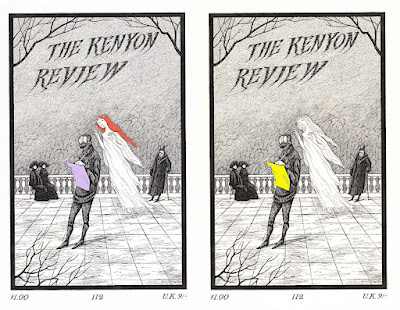 It is interesting to see how the focus of the drawing changes by dropping colors into the image as specified. On the whole, the first choice of a black and white image remains the most striking as the colors are more distracting than enhancing the image.

Edward Gorey's relationship with editors was often personal and informal. At the end of the letter, he states that a blank bill is enclosed because he lost track of the payment details for the project. This shows a level of professional trust that seemed to exist between the artist and his clients.

Posted by ampootozote at 6:32 PM

Thank you so much for once again sharing your original Gorey work and the treat of his correspondence to boot this time too! I always eagerly look forward to your posts and look through your old posts when I need a boost! So appreciated!