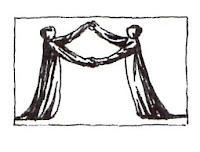 Q.R.V. was printed in a larger format (the drawings and text remained original size) as a trade edition in 1990 by The Fantod Press. For the trade edition, the book was titled Q.R.V. The Universal Solvent. My copy is signed by Mr. Gorey on the title page. A significantly shortened version of Q.R.V. was included in Amphigorey Again.
Posted by ampootozote at 6:00 AM

Thanks for your informative blog post. I was having difficulty figuring out the meaning of "Q.R.V."

Stumbled across this post seeking an explanation for the Tiger Lillies song “QRV” from “The Gorey End.” I wonder if the acronym “QRV” is related to the several household chemical products (usually hideously poisonous) sold under their initials in that era – i.e. the bedbug/flea/tick killer “PDQ” (“Pesky Devils Quietus”) or “ROR” (“Rough on Rats”), which was a fairly popular method of suicide in turn-of-the-century America.

It stands for anything and everything, including the items you mention. It is a fictitious "miracle product" that is both very helpful and extremely harmful, depending on the application.

In the Q code, a radiotelegraph code, QRV means Are you ready? or as an answer, I am ready.

To Kasey: QRV is one of the many "Q-codes" used by ham radio (amateur radio) enthusiasts worldwide. It means "Are you ready?" which may or may not be applicable to the song you mentioned: I don't know the band.

No, the post cards are completely different from the images in the book. The postcards use clip-art images and are not hand drawn.