Edward Gorey created several different coffee cup/mug designs. These mugs were sold through catalogs, at theater gift shops, and through The Gotham Book Mart. They can often be found on the secondary market today.

One of the earliest mug designs was made for The Metropolitan Opera and sold through its gift shop. I have seen it made with a band of gold around the upper lip, and plain. I have a plain mug floating around the house somewhere, and will post a photo when I run across it.

The most unusual mugs were the two created for the Signals catalog to advertise Mystery!, the weekly series of classic and modern murder stories. The two designs were made with printing that partially disappeared when the mug was filled with hot liquid, revealing new plot twists. While nice in theory, the mugs never really worked that well, and with repeated use the disappearing ink goes mid-tone grey. I am showing one of these mugs - once again I need to find the second example, but here is one! 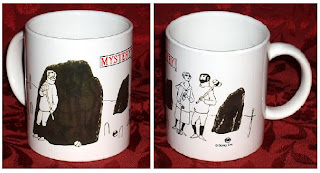 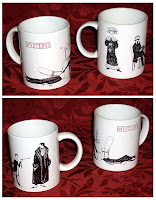 There was a second pair of Mystery! mug designs sold through Signals that did not have the disappearing ink.

Mr. Gorey created mugs for theatrical endeavors. The two mugs shown on the right were made for the Cape Playhouse.

A Mug was made for the off-Broadway production of Amphigorey which shows the drop curtain design. Surprisingly, there are no Dracula mugs. 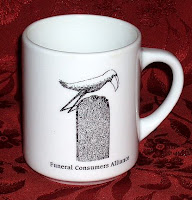 A mug was created for the Funeral Consumers Alliance that featured an image from The Osbick Bird.

The delightful image of Figbash appears on three different mugs. The central mug with the maze is a particular favorite of mine - it reminds me of a giant brain. The Figbash mugs also bring up the question: Is Figbash a single creature, or are there more than one? 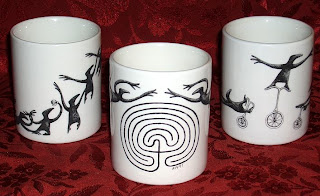 The Edward Gorey House has revived the tradition of mugs by Edward Gorey by creating a new line of coffee mugs which are for sale through their gift shop and on line.
Posted by ampootozote at 6:00 AM