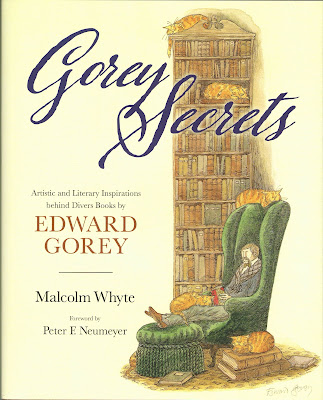 Gorey Secrets by Malcolm Whyte is a veritable treasure trove of behind the scenes information about the many inspirations and influences Edward Gorey drew upon to create his unique books. Concentrating on more than two dozen volumes written and illustrated by Mr. Gorey, Mr. Whyte goes in depth to explore the origins of ideas, and traces visual imagery.

Perhaps the most astounding bit of detection is the backstory behind The Lost Lions, Or Having Opened The Wrong Envelope, a book Edward Gorey self published in 1973 through his Fantod Press imprint. While I am not going to repeat the backstory here, Mr. Whyte's investigative determination to get to the root of this tale is what makes Gorey Secrets such a pleasure to read.

Posted by ampootozote at 8:09 AM