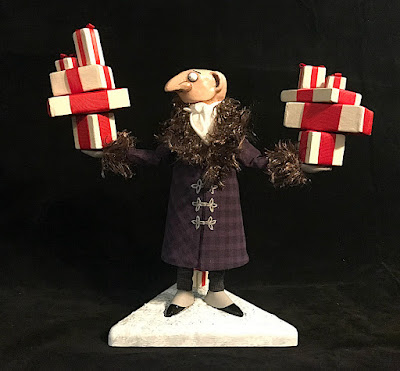 To celebrate our 42nd anniversary, my husband Bill Campbell once again has surprised me with another Mr. Earbrass toy that he created (to see the toy figure Bill made me last year, Mr. Earbrass Plays Croquet see my post from January 15, 2021 HERE). 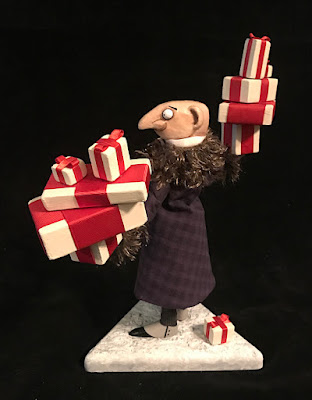 Taking inspiration from an Edward Gorey Christmas card image, we find the intrepid Mr. Earbrass in his finest holiday apparel, braving the elements to deliver gifts to his friends. Completely made by hand, this new Earbrass figure is also an old fashioned toy "rocker" that pivots on an interior spring. Bill has been experimenting with this style of toy and Mr. Earbrass bobbles front to back and side to side when touched. Each of the gifts he holds is a small wooden box that Bill created and filled with noise making baubles that rattle when the figure is set in motion. You can also turn the head to face in different directions.

The rocking motion brings the figure to life, giving the impression that Mr. Earbrass is barely keeping his balance on the icy terrain. 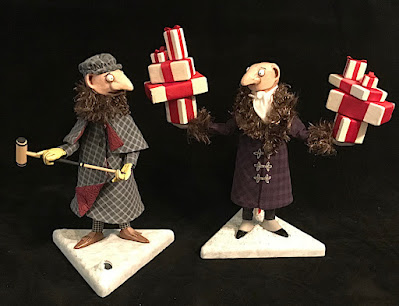 The gift giving Mr. Earbrass joins the previous Mr. Earbrass Plays Croquet incense smoker. When Bill sculpted the head for the first figure, he made a mold so he could create multiple heads as needed. 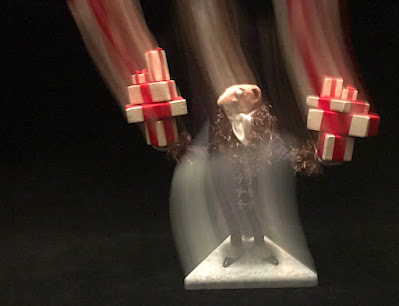 While photographing the new toy, the camera caught  Mr. Earbrass' theatrical entrance to the proceedings, looking rather like a candy striped ghost from a production of A Christmas Carol in his native Mortshire.

Posted by ampootozote at 9:54 AM

That is beautiful! A wonderful piece of art!

What a fantastic work of art!