Auction News - A New Record for Gorey Art at Auction 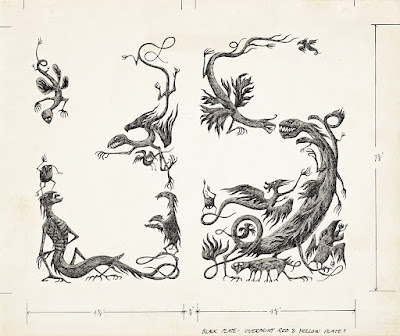 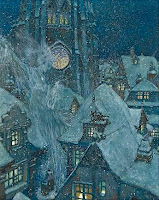 The first record came early in the sale for a 1911 masterpiece painting by Edmund Dulac for The Snow Queen which sold for $125,000.00 (hammer price plus buyer's premium). This was followed shortly thereafter by a new record auction price for original artwork by Edward Gorey - $27,500.00 (hammer price plus buyer's premium) for a 1964  pen & ink book cover design for The Dark Beasts, a paperback collection of stories by Frank Belknap Long (this piece has not been added to my collection). 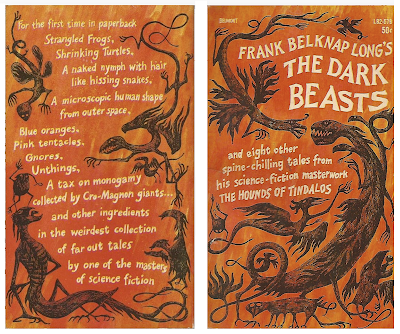 The 7 3/8" x 9 1/4" black and white image (on a 9 1/4" x 11 1/4" sheet) depicting all manner of demons from Hell has an imaginative nightmare quality not often found in Edward Gorey's works. The writhing beasties bare their teeth and claws at one another while fixing their burning eyes on the viewer. The lyrical elegance of the original black and white artwork was somewhat diminished in the final book jacket design due to the addition of a fiery background and masses of blocky white type crowding amongst the creatures. 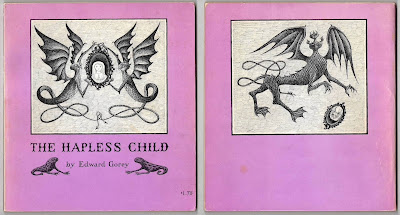 The nasty Dark Beasts creatures are siblings to the other worldly monsters Mr. Gorey used three years earlier for his 1961 book The Hapless Child. Members of this Hellish family adorn the covers and one hidden monster is hidden in every drawing within the book. In this volume the monsters are more metaphorical than menacing, being silent commentators rather than active participants in unfolding drama.

Along with three other works by Edward Gorey offered at the December 16, 2020 Swann auction, The Dark Beasts was consigned by The Edward Gorey Charitable Trust and proceeds from the sale will benefit the Trust's charitable mission statement.

Posted by ampootozote at 6:19 AM

Thank you, Irwin! Those “foul Small Creatures” brought no small foul figure. Thank you also for making the HC stylistic connection for readers. We were delighted to work with the EGC Trust again and thrilled that the sale of these artworks will help continue to support Gorey’s causes.