Beginning in 1992, Edward Gorey produced a series of ten limited edition prints that were sold exclusively through the Signals Catalog. Signals was the merchandise catalog for PBS Public Television and featured many books, t-shirts, puzzles, and other special pieces designed by Mr. Gorey. Some of the items, like the series of limited edition prints, were exclusive to the catalog. Each of the ten Signals prints were issued in two limited editions: A hand signed and numbered edition, and a hand numbered series with an embossed Edward Gorey signature. Mr. Gorey hand signed the first edition but did not hand number any of the prints in either edition. All ten images created for the Signals series were show stopping images, highly detailed and bursting with interesting characters. While prints #1 - #9 in the series were either square or rectangular and were all black and white images, print #10 was a full color image. 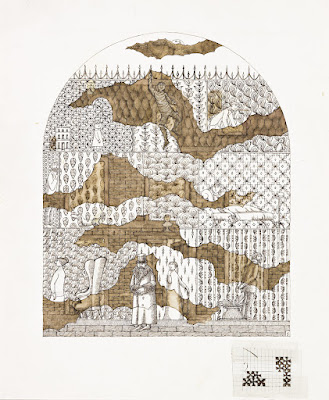 The recent Illustration Art Auction at Swann Auction Galleries (December 16, 2021) sold a piece of original artwork by Edward Gorey intended to be Print #6 in the series. Sold by the Edward Gorey Charitable Trust, this is an unusual pen & ink with watercolor. In this piece, Mr. Gorey set up a visual and technical challenge for himself which he abandoned just as he was on the cusp of completing the piece. This piece of art is not in my personal collection.

The image shows a three story home where both the interior and exterior are visible at the same time. Edward Gorey played with cutaway imagery on several occasions, but it appears the complicated nature of this piece got the better of him in the end. Parts of the image representing the interior of the home are left black and white, while floating ribbon-like shapes showing the exterior of the home are watercolored in sepia tones. 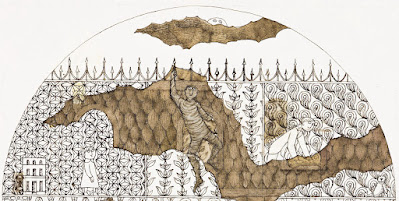 While we do not know Edward Gorey's exact intentions, it could be argued that the black and white areas represent billowing clouds of fog outside the house and that the sepia colored areas are the spaces between the clouds. The fact that the "clouds" reveal an x ray view of the interior of the home is a typical Gorey twist.

This is an intricate, monumentally confusing image, and it is clear that Edward Gorey's watercolor technique did nothing to clarify the scene. In the areas where watercolor is applied, the pen and ink details of the drawing are softened. I believe the choice to blur the details had to be an intentional decision; Mr. Gorey had been combining watercolor with pen & ink on his artwork for over 40 years. The ink chosen for this drawing was clearly water soluble, so that it would blend with the sepia overpainting. In most areas where the sepia has been applied, the softening effect looks intentional, whereas in other areas the blurring obscures the image too much. 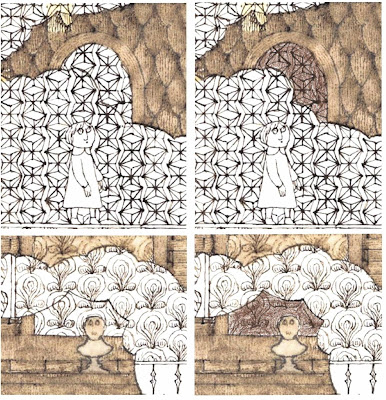 In three places, the area to have watercolor added is indicated but remains unfinished. These areas are clearly outlined on the drawing. In the examples shown above, the left image shows the unfinished areas and the right image shows the same areas, with the missing sepia added. 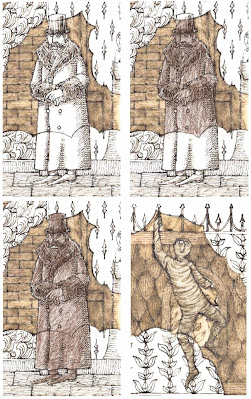 The unfinished gentleman at the bottom of the artwork could have several interpretations. The image upper left is the unfinished artwork. In the upper right image, just the areas inside the sepia have been filled in. At lower left, the gentleman's entire body has been filled in. This is similar to the burglar escaping the upstairs window; his right leg has been filled in with sepia. Filling in the leg may have been a mistake, but could also be an indication that the burglar's right leg is outside the window frame. 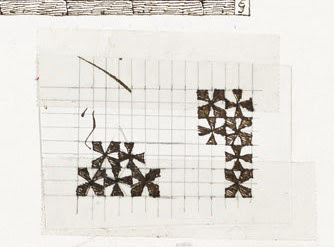 Another fascinating part of this piece is the swatch of wallpaper design that is taped to the lower corner of the art. On a hand drawn grid, Edward Gorey is experimenting with two layouts for a possible wallpaper design. While this design does not precisely correspond to the wallpaper patterns in the house, it shows the care Mr. Gorey took in the planning stages to create repetitive patterns. Delicately drawn pencil grids are occasionally visible (just barely) throughout the various wallpapers in the house.

We will never know how Edward Gorey intended to fully complete this piece or why he abandoned the image. We can only delight in the archeological nature of this piece of original art; it gives us an "over the shoulder" glimpse into how Edward Gorey approached a large, complicated drawing.

Posted by ampootozote at 7:11 PM

I am curious to know if you have an idea of what it sold for.
I have been attending a few Gorey item auctions and find the choices and the resultant pricing rather interesting.